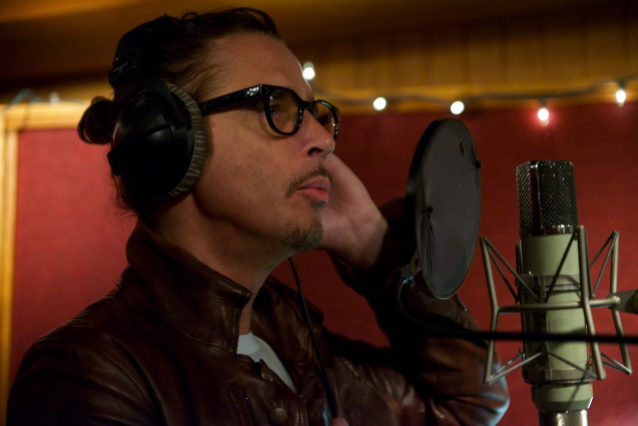 Last week, Chris Cornell's estate surprise-released a new album of covers, "No One Sings Like You Anymore", featuring 10 tracks he personally selected and sequenced to celebrate artists and songs that inspired him. Recorded by Chris in 2016, the LP features his renditions of John Lennon's "Watching The Wheels", GHOSTLAND OBSERVATORY's "Sad Sad City", Harry Nilsson's "Jump Into The Fire", Carl Hall's "You Don't Know Nothing About Love", ELECTRIC LIGHT ORCHESTRA's "Showdown", Terry Reid's "To Be Treated Rite", Lorraine Ellison's "Stay With Me Baby" (originally released for HBO's show "Vinyl"), "Get It While You Can", popularized by Janis Joplin, and a new studio recording of "Nothing Compares 2 U", written by Prince. Chris's cover of GUNS N' ROSES' "Patience", which was released on his birthday this year, and earned him his first solo Billboard No. 1 on the Mainstream Rock Songs chart, is also included on the album.

Asked in a new interview with USA Today if there is more unreleased music from Chris that could see the light of day, his widow Vicky said: "Yes. All of Chris's music, including SOUNDGARDEN, will see the light of day because there's nothing in the world that lifts me most than sharing Chris's gifts, having people speak his name, and having his music out there. He's alive that way and his legacy lives on. So it's the most important thing to me, seeing how much people love him, miss him, respect him, and how much we want more of his music out there. So everything will be released."

All instruments on "No One Sings Like You Anymore" were played by Chris Cornell and Brendan O'Brien, who also produced and mixed the album.

In December 2019, Vicky Cornell filed a lawsuit against surviving SOUNDGARDEN members Kim Thayil, Matt Cameron and Ben Shepherd, alleging the group owed Cornell's estate hundreds of thousands of dollars in unpaid royalties. She called the move an "unlawful attempt to strong-arm Chris' Estate into turning over certain audio recordings created by Chris before he passed away."

Vicky claimed the seven unreleased songs were "solely authored by Chris; contain Chris' own vocal tracks; and were bequeathed to Chris' Estate" for the benefit of her and their kids.

Responding to Vicky's lawsuit, Thayil, Cameron and Shepherd claimed that they "don't have possession" of their "own creative work," and alleged that "Vicky Cornell has possession of the only existing multi-track recordings of the last SOUNDGARDEN tracks that include Chris Cornell's instrumental parts and vocals. All of the band members jointly worked on these final tracks, Vicky now claims ownership of the final SOUNDGARDEN album." They also insisted that all of the bandmembers, not just Cornell, are owed monies, but none of them will be paid until "expenses are paid and the partnership shares of earnings can be calculated and distributed."

In their court filing, Thayil, Cameron and Shepherd insisted they had been working on the unreleased songs as a band as far back as 2014. As evidence, they point to a February 2017 article where Chris himself spoke to Music Radar about SOUNDGARDEN's new material. They also claimed they last got together in the studio in April 2017 to do more work on the tracks but took a break to go on tour. A month later, Chris committed suicide by hanging himself in a hotel.

Thayil, Cameron and Shepherd also said they'd corresponded with Vicky about the songs, and she had admitted they were the band's property, not just Chris's solo work.

In her lawsuit, Vicky claimed that she had offered to share the unreleased recordings with SOUNDGARDEN, so they can be released in a way that respects Chris's wishes — including having his producer involved — but that the band refused. She also accused Thayil of putting her family in harm's way by making intentionally misleading comments to SOUNDGARDEN's "loyal, rabid fan base" and suggesting that she is the main obstacle to the band putting out another album. Vicky's suit also alleged that SOUNDGARDEN "has not produced any partnership documents, much less any documentation signed by Chris, supporting their conclusory claims of ownership." Furthermore, it noted that "there is no evidence that the [unreleased recordings]… were ever intended to be anything but Chris' sole and exclusive property."

In November 2019, Thayil told the satellite radio program "Trunk Nation" that it was "entirely possible" that a new SOUNDGARDEN album featuring the final recordings by Chris Cornell could see the light of day. "We definitely have another record in us," he said. "Stuff that's written, stuff that's demoed and recorded — certainly. All it would need is to take the audio files that are available... We can get the producers we want to make it sound like a SOUNDGARDEN record."

The three remaining members of SOUNDGARDEN, along with METALLICA, FOO FIGHTERS and members of AUDIOSLAVE, performed together for the first time since Cornell's death at a benefit concert honoring the singer in January 2019 at the Forum in Los Angeles.