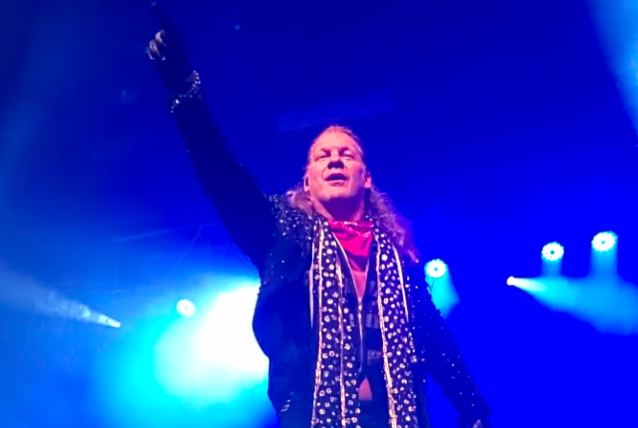 FOZZY returned to live activity for the first time in seven months earlier this week when the band performed three shows in South Dakota, North Dakota and Iowa.

One fan posted a photo from Saturday night's FOZZY concert in Minot, South Dakota, which appears to show the crowd not social distancing despite the coronavirus pandemic.

During his "Saturday Night Special" live stream, FOZZY singer Chris Jericho defended his band's decision to go ahead with the dates, saying that he was surprised to learn the shows were still on after FOZZY's "Save The World" tour was postponed twice.

"We actually did [two] shows [so far] this week. And the reason for that is we had our tour — the 'Save The World' tour — which was originally booked for April and May, it got postponed to July and August, then got postponed to October and November. But four shows remained in August. And I was, like, 'How?' The shows are in South Dakota, and North Dakota, and we have one in Fort Madison, Iowa, which is right near the border of South Dakota."

The FOZZY shows were apparently given the green light to proceed because while daily virus cases have been trending upward in South Dakota, the seven-day average is still only around 84, with fewer than two deaths per day.

Jericho said: "The reason why the shows are happening — have happened; we did two already, and we've got our third one tonight — is because these states of North Dakota and South Dakota have low COVID cases; less than a thousand in both states. I think Florida had, like, nine thousand today alone. The venues are kind of either outside or they're half capacity. We're sold out tonight in Minot with, I think, 50 percent capacity. Last night, we were sold out in Sioux Falls, South Dakota with, I think it was 35 percent capacity. We hand out masks at the door, there are temperature checks — all that sort of stuff. We basically just stay on the bus all day. Everyone in the FOZZY camp — crew and band — has been tested."

According to Jericho, the first two shows went well. "It's been so great to be back on stage again after seven months," he said. "The last gig we played was on the Jericho cruise, which is so hard to believe — it was like on a different planet, back in the days before the 'rona changed everything."

FOZZY is scheduled to perform tonight (Sunday, August 9) in Sturgis, South Dakota as part of the 80th annual Sturgis Motorcycle Rally, where 250,000 people are expected to gather. Masks are encouraged, but not required at the 10-day festival, which is largely free of social distancing restrictions common elsewhere in the country.

Chris Jericho and his band FOZZY played to a packed concert with no social distancing or masks last night in South Dakota.