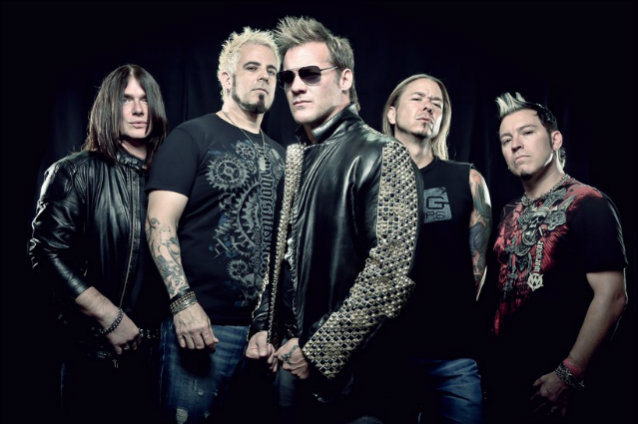 CHRIS JERICHO: 'If METALLICA And JOURNEY Had A Bastard Child, It Would Be FOZZY'

Metal Wani editor in chief Owais "Vitek" Nabi recently conducted an interview with FOZZY frontman Chris Jericho. You can listen to the entire interview below. A few excerpts follow (transcribed by BLABBERMOUTH.NET).

Chris: "We spent the last two years on this. We really wanted it to be a record that had not just two singles, but three singles, where every song could be a single, like the classic records like [GUNS N' ROSES'] 'Appetite For Destruction' or [DEF LEPPARD's] 'Hysteria' or INXS 'Kick', where it's just single after single after single on the record. You never knew how many great songs there were on it. That's what we wanted to do. We just wanted to focus on songs and not worry about whether it has a guitar solo or wussy strings. After two years of a lot of work and reconfiguring the songs and working on them over and over, we achieved that."

On whether the direction of "Judas" was the product of FOZZY finding their sound:

Chris: "The only way we have a chance to stand out in this day and age is to do things our way and do the things we want to. We love bands who have no problems changing or reinventing their own sound like U2, GUNS N' ROSES, LED ZEPPELIN and THE BEATLES. There were never two albums that were the same. Like THE BEATLES albums for example, there was a lot of different songwriting [styles] on them. And we wanted to go in that direction, like 'If it sounds good, we're just going to do it.' And I think we started doing that on 'Do You Wanna Start A War' and really followed through on 'Judas'. There's a lot of diversity on this record. There's a lot of different types of songwriting. A lot of different types of parts that maybe a lot of bands wouldn't try. We have to try it because it's who we are as musicians. It's the influences of musicians that we have. We knew that if we stood out and did it ourselves and stayed true to ourselves, that the record would turn out great and our fans would appreciate it and we'd make new fans as well and that's what it's all about."

On the wide array of influences each member of FOZZY has:

Chris: "There are some wide influences in the band. That's a reason why we have the sound we have. Obviously, we are all influenced by the classic metal bands PRIEST, MAIDEN, OZZY and the SCORPIONS. There's a METALLICA influence and PANTERA and that type of thing. There's a lot of rap influences as well and there's some background percussion. There's some music from the '70s. We love rap rock or SLAYER, HALL & OATES, JOURNEY, STYX and FOREIGNER as well as the classic '60s bands like THE [ROLLING] STONES, etcetera. There's really no rules as to what FOZZY's sound consists of. It's a vibe and a feeling. I think, one thing is that since we really put the focus on FOZZY as a full-time thing in 2010, it's the fourth the record since the rebirth and I think you can look at most bands, it takes them up to two or three records to really find out who they are as a band. You can look at METALLICA for example. That's what we've done and I think now with 'Judas', we've really, really figured out what our sound is. It's a mix of many different things, but the bottom line, it's a very heavy, groove-oriented [sound] with a lot of melody and a lot of harmony. That's what FOZZY is. If METALLICA and JOURNEY had a bastard child, it would be FOZZY. Now I'm going to change it for this record: 'If METALLICA and JOURNEY had a bastard child and it was raised by AC/DC, then you would really know what FOZZY sounds like.'"

While Jericho and guitarist Rich Ward helmed FOZZY's previous records, the production duties on "Judas" were handled by Johnny Andrews, who co-wrote FOZZY's "Lights Go Out" track back in 2014 and has written songs with the likes of ALL THAT REMAINS, THREE DAYS GRACE and HALESTORM in the past.