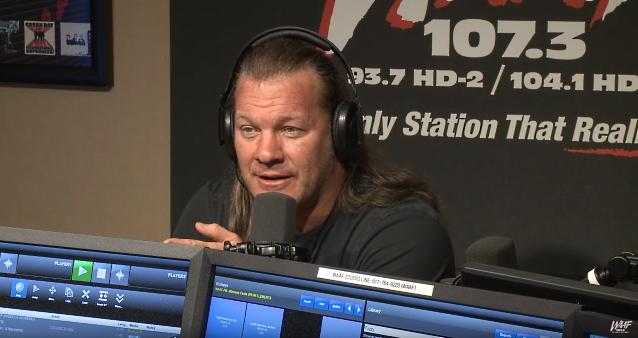 The FOZZY frontman and wrestling superstar made the comment two weeks after the National Football League announced that Jennifer Lopez and Shakira will perform at Super Bowl LIV. The pop singers will be the headlining acts for the halftime show on February 2, 2020 at the Hard Rock Stadium in Miami, Florida.

During an interview with Mistress Carrie of the Boston radio station WAAF, Jericho weighed in on the likelihood of METALLICA over day playing the Super Bowl.

"I was talking to Lars [Ulrich, METALLICA drummer]," Chris said (see video below). "Lars and I are friends. And I [asked him], 'Have you guys ever been invited?' And he goes, 'We got invited to play the pre-Super Bowl party one time in San Francisco, but never.' They are so anti-rock and roll, they'll bring in… I remember they went through the phase where it was THE WHO and Paul McCartney and THE [ROLLING] STONES. And that was great too.

"How about METALLICA? How about KISS? How about AC/DC?' Hello?" Jericho continued. "How about SLIPKNOT? You want a spectacle? Obviously, they might be too heavy. But METALLICA needs to play the Super Bowl… There are stadium-level bands that have never been invited to play. I'm getting a little sick of it."

Chris noted that the playlists at NFL stadiums everywhere have included music by METALLICA for a number of years, yet the heavy metal giants have never performed at the halftime show.

"They play METALLICA during the game more than anybody else," Jericho said. "It's 'Seek & Destroy', it's 'Enter Sandman', it's 'Sad But True' — it's, like, over and over and over again. So they're good enough to play in between plays, but not good enough to do the Super Bowl. But J.Lo is. Give me one J.Lo song. Sorry, I can't. Oh — 'Jenny From The Block', maybe. Something like that. Who cares? I don't wanna see it. Shakira — shake your ass off the stage and get METALLICA on."

Jericho is not the first musician to call out the NFL for not hiring rock artists to perform at the Super Bowl. Last month, Dee Snider slammed the league, saying: "Once again the great heavy music that rocks the stadiums week after week, game after game is completely ignored. I guess we don't shake our ass enough!!"

The TWISTED SISTER singer later clarified his views, adding: "My point about this years @NFL halftime show isn't a slight on @shakira or @JLo, it's frustration that week after week rock is the go to music during games but gets no respect when it comes to the Super Bowl! And I don't think I'm popular enough for that slot. But @Metallica..."

Only two Super Bowl halftime show performers have come even remotely close to being heavy metal: THE WHO in 2010 and AEROSMITH in 2001.

According to Sportscasting.com, the NFL considers popularity, music genre, and the artists' overall performance value choosing the performers for the halftime show. However, it's not the NFL that chooses who takes the stage. The league comes up with a short list, but the host cities pick the Super Bowl halftime performers.