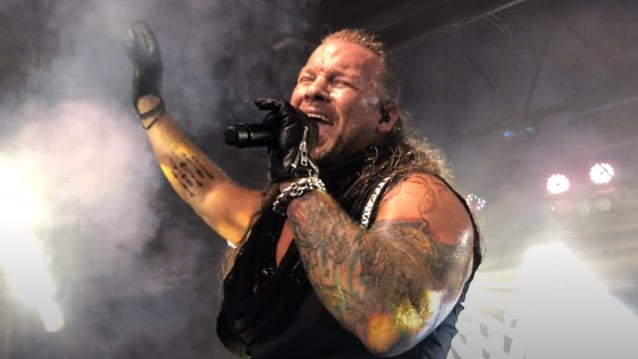 During a recent episode of his "Talk Is Jericho" podcast, FOZZY frontman and wrestling superstar Chris Jericho told the whole story behind his health issue last December that resulted in FOZZY canceling shows for the first time ever. Chris detailed the symptoms that started during FOZZY's U.K. tour that led to his hospitalization and pulmonary embolism diagnosis in London. He spoke candidly about the harrowing days having trouble breathing, watching his oxygen levels drop, and seeing specialists to help turn his condition around. He discussed his extended hospital stay, being stuck in London unable to fly before the holidays, and the hard work he put in once he was able to return home to Tampa.

Jericho said in part (as transcribed by BLABBERMOUTH.NET): "Back in November, end of November of 2021, FOZZY had a tour of the U.K. And first show was in Liverpool, and that one went good. The second one was in Manchester. And then the third one, I believe, was in Newcastle. And Manchester, after the show, I went out, had a couple of drinks, got back in the bus fairly late. And the next day in Newcastle when we were doing the show I felt a little bit winded — which was weird, because I'm never winded on stage. Even if it's super hot — sometimes you play a venue that has a low roof or something along those lines, and you get super hot to where you're, like, 'Oh my gosh. It's hard to breathe.' This was not that. The venue in Newcastle, the Riverfront, was a nice place [with] a high roof, not super hot. But I found myself kind of searching for breath, gasping for breath during the songs, to where it was hard to even sing all the lyrics. I was joking, I kind of sounded like Vince Neil, who's notorious for singing every second or third word and letting the crowd fill in the rest. I didn't really think much of it. I had a couple of more shows — in Ireland, we did Dublin and Belfast, [which] were just insane — but same thing: kind of feeling a little bit short of breath.

"During this time frame, when I was feeling a little bit kind of short of breath, I was talking to my doctor at home in Tampa who said, 'This could be blood clots," he continued. "You could have some blood clots. Sounds like it might be that.' And she said, 'When you get back home to Tampa, we'll put you through a couple of CT scans and kind of see where you're at. But if you start feeling really short of breath, go to the hospital directly.' So fast forward to the next night, the show was in a place called Chester. So, once again, low roof, and it was so, so hot, 'cause the place was sold out. Every gig on this tour was sold out. It's the first time that we've ever had that; we had 12 shows and every one of them was sold out before we even left and got on the plane.'

"So, in Chester I was really feeling like, 'This is terrible. I can't breathe.' There's a door right by the stage that leads to the outside, and I said, 'I'm just gonna walk offstage. I can't take it.' But I finished the show and then my doctor said, 'You have to go to the hospital, like, now.' And we were in Bournemouth the next night and then headed to London for a press day. And I thought, 'Well, I'm not gonna go to the hospital in Bournemouth or Chester. Let me just wait till I get to London and we can figure out kind of where I'm at.' So we did the Chester gig, and then I had two more shows — Birmingham, where I felt okay, but I knew that we had London after Bournemouth, and that would be kind of the place where I'd get checked out and see kind of what's going on. Bournemouth was the same thing where I was getting a little bit hot, and we cut a couple of songs — a song called 'Burn Me Out' that's super hard to sing, and a couple of other ones. I think we ended up doing 12 or 13 songs, even though we usually do 15 or 16. And that was it. And I remember saying after the Bournemouth show, 'I can't do another show like this. We need to figure out what's going on.' So what I had our manager Mark Willis do was call a friend of ours called Luke Bell. Now Luke Bell worked for us as our tour manager for years, and he's now gone off and he works for the RED HOT CHILI PEPPERS now. He connected us with a 'rock doc.' Now what is a rock doc? A rock doc, a rock doctor, is kind of a guy who travels to you when you don't have time to travel to them. So I went to London and we parked the bus outside the O2 arena, 'cause there's a parking place where buses can go, and took a taxi to the Hard Rock Hotel in London, which is where we were gonna be based out of to do our press day…

Jericho, a former WWE world wrestling champion who currently competes for All Elite Wrestling, was unable to sing at FOZZY's London concert on December 12, 2021 at the O2 Academy Islington. Instead, FOZZY held what was being billed as the "Ultimate Fozzy Fan Fest" that started with a world-exclusive premiere listening party of FOZZY's latest album, "Boombox", four months before the LP's official release. Then Jericho hosted a question-and-answer session with questions submitted by fans before the event concluded with FOZZY playing two of its biggest songs, "Enemy" and "Judas", live, with special guest vocalists — the fans themselves.

Prior to the London gig, FOZZY canceled two shows on its U.K. tour after Jericho was hospitalized.

FOZZY had already played nine shows as part of a 12-date "Save The World" tour of the U.K. before being forced to scrap a concert in Swansea and a show in Nottingham.