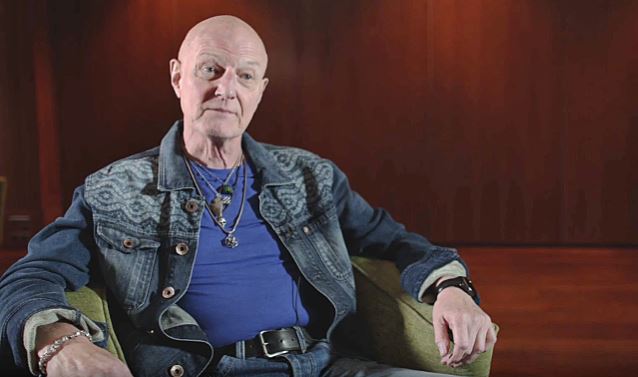 CHRIS SLADE Talks About His Role In AC/DC (Video)

A new two-minute video clip in which AC/DC drummer Chris Slade talks about playing with the band can be seen below.

Says Slade: "AC/DC is like a… It's an institution, for a start. The fans feel a part of the family, and that's a good feeling. It's a really good feeling.

"My role in AC/DC is to keep time and to drive the band as much as I can. That's a drummer's role anyway.

"Playing with all these guys, it's a jigsaw, and everything slots into place.

"The two bass drums at the back, that came out of the 'Thunderstruck' video. On the record, you know, there the 'Thunder' [part] was, I thought, 'I'm doing a video. How can I make that into something?' And I said to Dick [Jones, the drum tech], 'I want a bass drum here and here.' And he said, 'You want a bass drum there and a bass…' I said, 'About head height. Something like that.' And he said, 'All right, boss.' [Laughs] And the next day he rigged it all up with all these contraptions to rest them on, and I've been playing them like that ever since, actually.

"The audience just give you a kick — you know, the adrenaline. And the show is for them. And that's the whole point of you being there. You're not there for a social occasion, you're there to play rock music, so they jump up and down, and that feedback comes from you to them, and them to you."

Chris returned to AC/DC in early 2015 in time to perform with the band at the 57th annual Grammy Awards.

Slade followed Simon Wright in AC/DC's lineup, joining in time to play on 1990's "The Razor's Edge" album. When Phil Rudd returned in 1995, Slade was shown the door and harbored some bad feelings about that for a while. Although he's 69, he still hits the drums as hard as ever.