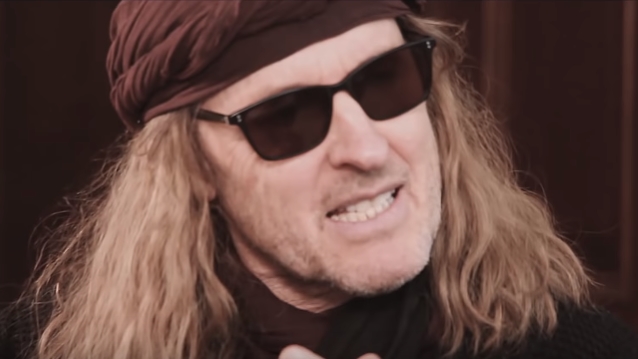 Dr. Guenther Dobrauz-Saldapenna of Appetite For Disruption recently conducted an interview with drummer Chris Von Rohr of Swiss hard rock veterans KROKUS. You can watch the entire chat below. A few excerpts follow (transcribed by BLABBERMOUTH.NET).

On the early days of KROKUS:

Chris: "In the beginning, it's a dream, but then when you enter the dream, the hard work starts. There's no way around that. You need that drive and then, of course, a fearless fire, the fearless fire, I always say you need that. And, of course, you've got to think big. If you think small potato, you stay small potato. If you think very big, you may not reach always the top, but you make a giant step ahead. Fearless. You need to be fearless. That's it."

On where "conviction" played a role in KROKUS's success:

Chris: "It was for the 'Headhunter' album. It was finished in Orlando, a great album which went platinum in America and in Canada. We had these great songs and sound, but the cover artwork, the record company had some stupid shrink-heads on the front. We said, 'No, no. This is too macabre. This is anti-commercial, this is bullshit.' We have the motivation of a platinum dead-head with silver shining dead-head picture in a reddish kind of atmosphere, really something which looks little bit classier. There were a lot of fights going back and forth. I had to fly to New York from Switzerland to explain that exactly and push it through. In the end, a legendary cover came to reality. You can see it in a Woody Allen film, you can see it in the background of a record store. They asked to put it there because it looks really good. It was worth the fight, but it was a pain in the ass big time, because we really had to convince people and tell them, 'That's the vision. That's the way we go.' I fought for that because nobody is going to do it for you. You have to do it for yourself."

On navigating through the music business:

Chris: "You almost have to be like a snake to skin many times in your life. Technically, what we do, the work, gets more and more fast and gets more and more efficient and you need to find your way and arrange yourself with that. Faster is not always better, by the way, but you have to adjust, you have to really adjust to it and be floating, not wanting to stay in one position as well from the thinking to the point as to where you are. You have to be on the way and float. You have to be in motion, always. Without that, you are lost."

On what's next for KROKUS:

Chris: "We are about to write some new songs. We are preparing our farewell tour because we want to stop on top, make it a great goodbye, still in full steam, full power. I'm writing my memoir, a big, big story; 'Heaven, Hell And Rock & Roll' will be the title. This will be out next year."

On whether he believes rock is dead:

Chris: "No. I think the new big stars we don't know yet. There are somewhere in the cellar or at home. There are immense, a lot of great talent around. Rock music is going to go a long, long way, but then we have to say something. The '60s and the talent, like THE BEATLES, [Jimi] Hendrix, Bob Dylan and [THE] ROLLING STONES, that's kind of like Mozart, Beethoven, Bach and Chopin. These guys will never come [again]. Things like that, or the 'King Of Pop', even, Michael Jackson. I don't think we'll have something like this so far. They will look back at this century and this decades of creation as the big, high times of pop and rock music. That's for sure. I believe that because there was another spirit, the spirit of the '60s where I grew up. We're going to see. I believe in the youth. I believe in new talent. I believe in some guys they can discover like a treasure in some big box. They can dig out, then they can make their own version of it. So, no, rock music, as long as there are guitars, there are ears and the heart, the rock music will go on. One-hundred percent. One-hundred percent on this planet, as long as human beings are here."

KROKUS's "farewell" tour will kick off next year. The Swiss hard rock veterans announced their plan to pull the plug on their four-decade-plus career in a Facebook post, writing: "KROKUS shows have always been special and should stay that way. That's why we decided to stop when it's still really good. That's how the fans should remember us."

They added: "Unlike other bands that are on their eternal 'farewell tour,' we will keep our word and pull the plug at the end of 2019, handing over the 'Rock Magic Wand' to the youngsters."