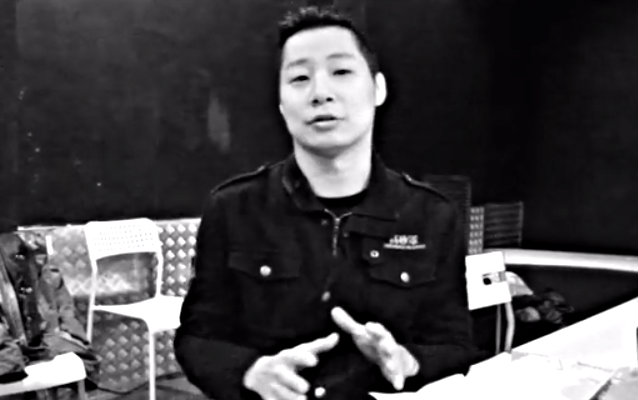 On December 6, Tempi-Dispari conducted an interview with vocalist Freddy Lim of Taiwanese metallers CHTHONIC before the band's concert at Orion in Rome, Italy as the support act for SATYRICON. You can now watch the chat below.

CHTHONIC's seventh album, "Bú-Tik", was released in North America via Spinefarm Records in the U.S. digitally on June 18 and on CD on June 25. The effort was recorded at Sweden's Sweetspot Studio by producer Rickard Bengtsson, who also worked on 2011's critically lauded "Takasago Army" full-length.

With "Bú-Tik", CHTHONIC continue their mission to build awareness of the myths of Taiwan and the tragic events in their country's history. Centered around the story of the 228 Massacre, the Bú-Tik Palace and the Mirror Of Retribution, "Bú-Tik" highlights what bassist Doris Yeh describes as "righteous violence, justifiable defense, and the armed spirits!"

In a recent interview with Metal Assault, Yeh stated about "Bú-tik": "The procedure or writing songs for the new album was different than our former albums. In the former albums, we were writing songs in heavy metal music, of course, but we were thinking about how to put the traditional melody into the music. In the new album, we did it the opposite way. We wrote the Taiwanese traditional melodies first and then used the heavy metal way to express it. So the new album has more traditional melody in it, and the concept behind the story is different from our former albums. It's more aggressive. The tempo, the riffs and the structures of the songs are more aggressive, so that's the difference in this album."

She continued: "We came up with the traditional melody in the chorus part, not the whole song, of course. [laughs] And then we tried to extend the whole structure of the songs, and the guitarist put more mellow riffs and tempo into the music. So, there's no conflicts and for us; it's very natural to do this, because I think while we're getting older and older year by year, we feel that we're closer to our roots and to our own culture. So it's natural for us to come out with this kind of a traditional melody, but we still love heavy metal a lot, so how to combine them and maintain the balance, that's the difficult job for us. I think in this new album we made a new achievement and combined those two different things perfectly, in our opinion at least."