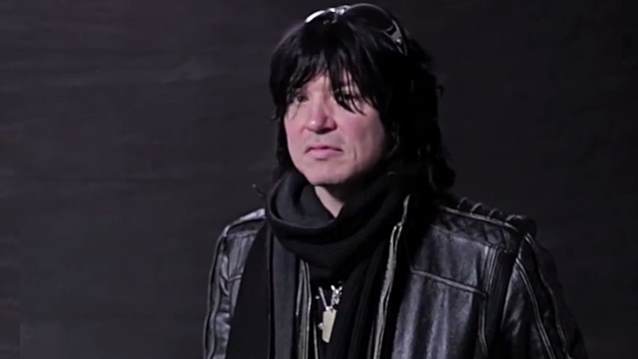 CINDERELLA frontman Tom Keifer is featured in Loudwire's latest "Wikipedia: Fact Or Fiction?" segment. In the 11-minute clip below, Keifer talks about the beginnings of CINDERELLA, his early battles with addiction, his frightening vocal cord surgeries and much more.

Collectors Dream Records has set a May 16 release date for CINDERELLA's "Stripped". Recorded live over the course of two nights — October 2-3, 1998 — at the Key Club in Hollywood, California during the band's "Unfished Business" tour, the disc is comprised of 14 hard-rockin' and blues-based tracks; included as a bonus are two songs recorded live in 1991.

In a September 2013 interview with the Syracuse Music Examiner, Tom Keifer was asked if there are any plans for CINDERELLA to record a new studio album. "Well, we're on a hiatus," he said. "It's not for lack of desire on our part, I always say, but it's got to be the right situation. We've been burnt by the record companies a couple of times and that leaves a bad taste in your mouth when you've put a lot of work in it. It's really the reason why I decided to produce my [solo] album independent of a label; you create what you want and then you find a label who likes what you created and we found a great label that has been amazing in support of the album."

He continued: "From the record companies' perspective, if they're going to invest a bunch of money into making a record, you don't know what the record's going to be. So in this day and age of limited funds, because of the piracy of music, record companies don't have the same resources that they used to. Stepping in and paying for the record and then be responsible for all the marketing too… It just made sense to me to make the record I wanted to create and find a label that listens to the finished product and says, 'We're in.' And more and more people are doing it this way."