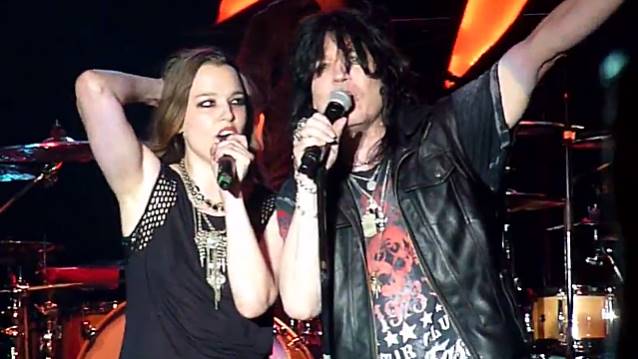 CINDERELLA frontman Tom Keifer joined HALESTORM on stage this past Saturday, July 5 at Taste Of Minnesota in St. Paul, Minneosta to perform the song "Here's To Us". Fan-filmed video footage of his appearance can be seen below.

HALESTORM singer Lzzy Hale tweeted the next day: "It was a pleasure singing with Tom @tomkeifermusic last night! What a powerhouse this man is!"

Keifer previously performed with HALESTORM in September 2013 in York, Pennsylvania and in Atlantic City, New Jersey.

She added: "Well, some day I’ll meet you [Tom Keifer] and confess all of these things to you."

Hale told Loudwire in a recent interview that HALESTORM is "almost done" with recording its third album. Hale explained, "We have a lot of really great songs. I think we finally cracked the code for this next record . . . That's what I love about writing records, you don't really know what you want to say on a record when you begin writing it. At least we don't. It's always halfway through the process and then all of a sudden, the light bulb goes off and the floodgates open."

It was a pleasure singing with Tom @tomkeifermusic last night! What a powerhouse this man is! http://t.co/XmTFBLof7D