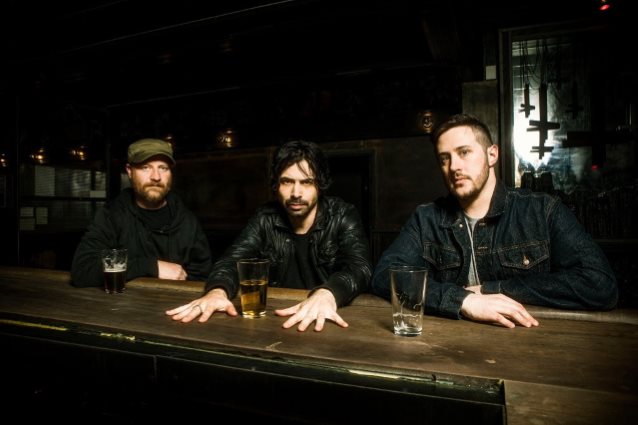 CKY has released a music video for the band's new single, "Head For A Breakdown". Directed by The Costa Sisters, the clop was shot in and around London, U.K. during the band's near-sell-out run earlier this year.

"We were lucky enough to get a day off to explore one of the best cities on earth with our friends," says the band. "The extremely talented Costa sisters, Elena and Sofia, were behind the camera. We decided to crash the Queen's Garden Party and film our video in front of the gates of Buckingham Palace.

"This was all impromptu footage mixed with the absolutely mental crowds at our sold-out nights in London," the band continues. "This is our tribute and thank-you to the diehard Bloody Alliance and all the new fans and friends we made in the U.K. this time around. Can't wait to see you again soon."

"Head For A Breakdown" is taken from CKY's latest LP, "The Phoenix", which was released on June 16 via eOne Music. The all-new LP is the first release since CKY put out "Carver City" in 2009. The disc was engineered and mixed at Rancho De La Luna, the highly regarded recording studio in Joshua Tree, California.

Chad I Ginsburg steps into the frontman role with charisma, charm, and bravado, confidently delivering a diverse performance as he claims a position that was clearly rightfully his to own. He's joined in enduring partnership and musical and personal chemistry by fellow CKY co-founder, Jess Margera, the drummer whose extracurricular work in projects like THE COMPANY BAND (with guys from CLUTCH and FIREBALL MINISTRY) expanded CKY's horizons as much as Ginsburg's solo work has as well. The duo returned to their primary project refreshed and reenergized, with bassist Matt Deis (ex-ALL THAT REMAINS),who first joined CKY in 2005.

CKY will set out on a lengthy tour serving as main support for HIM on their farewell tour this fall. CKY will also play headline dates leading up to and throughout that run.