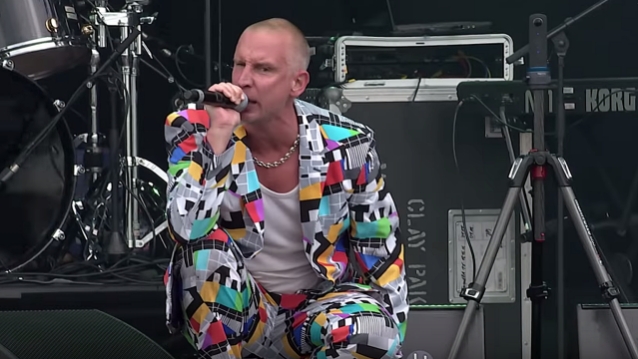 CLAWFINGER Releases Music Video For New Single 'Tear You Down'

Long-running Swedish rap/metal combo CLAWFINGER has released the official music video for its new single, "Tear You Down". The track will be made available digitally on October 4.

The band stated about the lyrical inspiration for the single: "The current political situation is really... interesting, where one's perceived feeling is more important than facts in today's society. Using twisted statistics to scare people into bad decisions is a daily occurrence and no matter how one argues for its cause, there's always a horde of opposition tearing down the arguments with "whataboutism" or distorted facts. Vote for the truth, but whose truth are we talking about?"

"Tear You Down" arrives approximately two years since the release of CLAWFINGER's last single, "Save Our Souls". That song was made available four years after CLAWFINGER announced it was calling it quits.

During the break from the studio, the members of CLAWFINGER were reportedly taking care of their families while performing sporadic reunion shows, mostly at European festivals. "CLAWFINGER no longer is our main job," the band explained at the time. "We all have other jobs and families to love."

CLAWFINGER's last studio album, "Life Will Kill You", was released in the U.S. in July 2008 via Locomotive Records. The CD, which entered the German Media Control chart at position No. 89 upon its European release in 2007, was recorded and produced at Sweden's Fear And Loathing Studios, a facility that CLAWFINGER runs along with the members of MESHUGGAH.