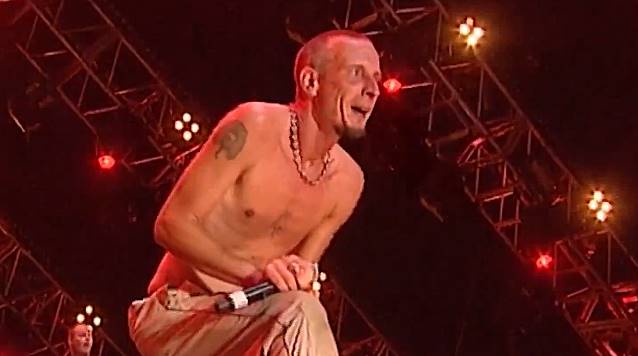 20 years after its original release, preparations started for the ultimate anniversary edition of CLAWFINGER's classic album, "Deaf Dumb Blind", one of the most important crossover albums of the 1990s. "Deaf Dumb Blind" was turned into "Deafer Dumber Blinder" (which can be taken as a promise considering content of the extensive reissue):

"Deafer Dumber Blinder" will be released on March 7 in Europe and April 15 in North America via AFM Records.

A performance clip of the song "The Truth", taken from the "Deafer Dumber Blinder" DVD, can be seen below.

Comments CLAWFINGER guitarist Bård Torstensen: "None of us would have thought in the early Nineties that we ould live our dream for almost two decades, travel the world and play for millions of people on three continents (Europe, America, Asia).

"Our anniversary box, 'Deafer Dumber Blinder', reflects pretty much what CLAWFINGER is all about.

"Enjoy the unreleased demotracks from early days up 'till 2005, a bunch of good B-sides, the classics from 'Deaf Dumb Blind', and have fun with a live DVD from Woodstock Festival Poland where we played in front of more than 100,000 people back in 2009. This DVD also contains bonus material. (2 Scandinavian documentaries, festival clips, MTV Most Wanted)."

Adds CLAWFINGER frontman Zak Tell: "'Deafer, Bumber, Blinder', the last and the tastiest piece of chocolate in the box is coming your way. It's a treat so sweet you just can't resist it. Demos, B-sides, Live footage, photos, the story of CLAWFINGER's humble beginning and more.

"This sucker comes with material no one has ever seen or heard before and it will be in stores shortly so be sure to keep your ears and eyes open and scream your heart out when it arrives.

"The kings are dead, long live the kings."

Says CLAWFINGER keyboardist Jocke Skog: "We've gone through a lot of stuff to make this a box worth owning.

"It's a tad late for an anniversary box since we released the first one back in 1993, but in this era where everything is online, it doesn't matter that much.

CLAWFINGER's final studio album, "Life Will Kill You", was released in the U.S. in July 2008 via Locomotive Records. The CD, which entered the German Media Control chart at position No. 89 upon its European release in 2007, was recorded and produced at Sweden's Fear And Loathing Studios, a facility that CLAWFINGER runs along with the members of MESHUGGAH.