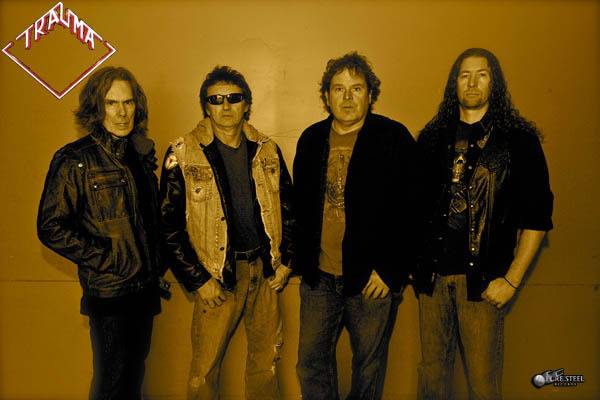 TRAUMA was founded in the San Francisco Bay Area in 1980 as one of the first of the New Wave Of Bay Area metal bands. The group's original lineup included Michael Overton on guitar, George Lady on guitar, Dennis Shafer on drums, Cliff Burton (METALLICA) on bass, and Donny Hillier on vocals.

TRAUMA quickly became well known throughout the California Bay Area and beyond, playing legendary venues like The Stone, Bill Graham's Wolfgang's, Whisky A Go Go, and The Troubadour. The first track TRAUMA ever recorded, "Such a Shame", was included on Metal Blade Records' "Metal Massacre II" compilation in 1982.

After Burton's departure to join METALLICA, the band changed personnel and musicians Kris Gustofson (drums),Ross Alexander Merson (guitar) and Lucas Advincula (bass) joined Michael Overton and Donny Hillier in their new lineup. In 1984, TRAUMA recorded the "Scratch And Scream" album for Shrapnel Records. The LP received many excellent reviews from primarily American and European heavy metal magazines such as Kerrang!, Circus and Metal Forces, to name a few.

The "Scratch And Scream" album, unavailable before on a legitimate CD issue, has long been considered a hard-to-obtain, classic heavy metal record.

Released on October 22, 2013, the "Scratch And Scream" reissue was remastered from the original master tapes and includes bonus tracks that feature the gone-but-never-forgotten bassist.

After a lengthy hiatus, TRAUMA reformed. Donny Hillier, Kris Gustofson and Lucas Advincula have been joined by guitarist Kurt Fry, a veteran songwriter and recording/touring artist.

A special event for Burton was held on February 10, 2013 — on what would have been Cliff's 51st birthday — at the Brick & Mortar Music Hall in San Francisco, California. For the first time in decades, TRAUMA actually performed never-heard-before songs written by Cliff himself. Also appearing on the bill were HELLFIRE and DAMAGE INC.

TRAUMA's music was comparable to that of IRON MAIDEN and MONTROSE with faster tempos, which can be heard in the tracks "The Day All Hell Broke Loose" and "Lay Low" from their debut album.

TRAUMA guitarist Michael Overton was interviewed for the 2009 book "To Live Is To Die: The Life And Death Of Metallica's Cliff Burton", written by U.K.-based author Joel McIver and published by Jawbone Press.

Burton, best known as a heavy metal bass player who made use of distortion and special effects, was killed in an accident on September 27, 1986 at the age of 24, four years after joining METALLICA. It was Burton's early influence that helped create METALLICA's unique musical style for which the band has become famous.

TRAUMA was recently interviewed on "In The Vault With Shanda Golden". You can now watch the chat below.