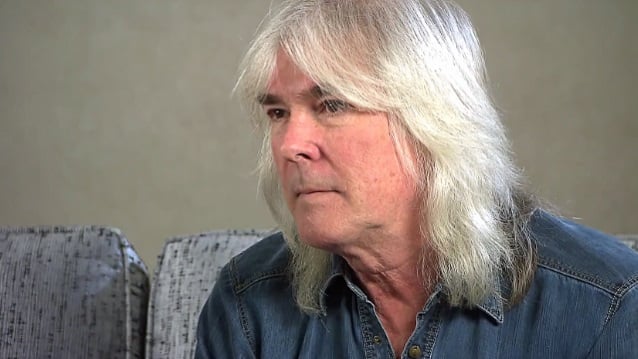 CLIFF WILLIAMS To Retire After AC/DC's Current Tour: 'I Feel In My Gut It's The Right Thing'

Cliff Williams says that he will retire from touring and recording after AC/DC's current tour, explaining that "it's the right thing."

The bassist's revelation follows a series of misfortunes to plague AC/DC. Last year, former drummer Phil Rudd was sentenced to eight months of house arrest after he was found guilty of taking drugs and making threats to kill a former employee.

In 2014, the band announced guitarist Malcolm Young's retirement from the group after he was diagnosed with dementia.

AC/DC has since resumed its tour with GUNS N' ROSES frontman Axl Rose as a "guest vocalist," meaning that most of the people Williams has spent the past four decades with are no longer there.

"It's been what I've known for the past 40 years, but after this tour I'm backing off of touring and recording," Cliff tells Gulfshore Life. "Losing Malcolm, the thing with Phil and now with Brian, it's a changed animal. I feel in my gut it's the right thing."

Williams added that he is proud of the band's massive accomplishments, which include having the sixth-highest-selling album of all time in the U.S. with 1980's "Back In Black".

"When you start out, you kind of hope for success," Williams says. "That's what you are working for. But you never really know. It's been surreal, really."

AC/DC released a video clip earlier in the week in which Williams talked about his role in the band. He said: "AC/DC has been… you know, just… I don't know what else I would wanna do. I love the music and I love playing in the band, and I'm all filled up.

"My role as part of the rhythm section is to give drive, to give foundation, and engine, if you like, [and] support the guitars.

"My first album with the band was 'Powerage', and that was 1977. It was all new and fresh, and these people, I didn't know them, and Australia, and I'm from London, and there was the whole fitting in thing. They were great — very accepting.

"They were very famous in Australia when I joined them. They'd pretty much gotten to the top of the heap there very quickly. And they'd been to Europe once or twice at that point too. But we were still touring on a modest basis. We were playing small venues with little equipment, with a little van, and we were all driving together in a station wagon and stuff. And that, over the years, has changed. Not to say it wasn't fun; it was a lot of fun."

The rescheduled dates of AC/DC's North American tour — which will be the band's first concerts here with Rose on lead vocals — will kick off in Greensboro, North Carolina on August 27, just five days after Rose completes his summer stadium run with GUNS N' ROSES.