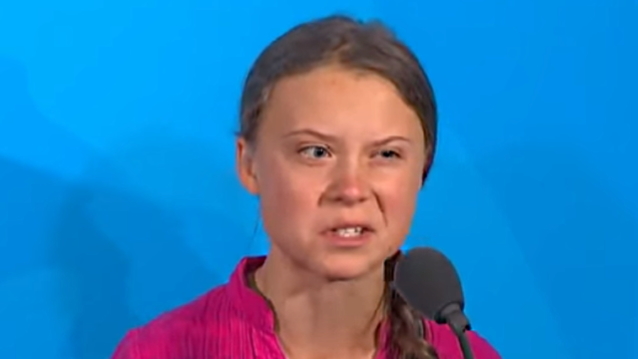 Climate Activist GRETA THUNBERG: 'From Now On, I Will Be Doing Death Metal Only'

Teenage climate-change activist Greta Thunberg says that she will be "doing death metal only" now that her fiery speech at the United Nations Climate Action Summit was turned into a killer metal song.

The viral YouTube hit "Greta Thunberg sings Swedish Death Metal" is the work of John Meredith, drummer for the New York metal band SUAKA, who told Rolling Stone he created the clip because he was "very impressed" by Greta's "passion and outrage. And the words she chose just evoked the darkness of the metal music I love: ENTOMBED, GOJIRA, AT THE GATES, SEPULTURA," he said.

Meredith copied Thunberg's speech into Pro Tools and growled along to her words himself to make the delivery sound "metal enough."

"I guess I didn't really have a specific intent other than to turn her brutal words into a metal song," he told Rolling Stone.

Earlier today, Thunberg shared a tweet containing Meredith's video and included the message: "I have moved on from this climate thing... From now on I will be doing death metal only!!"

The Swedish teenager gained international media attention in recent months for her outspoken activism on climate change, including the UN speech calling out world leaders for not responding to the climate crisis with more urgency.

President Donald Trump, who has repeatedly voiced skepticism about climate changere, shared video of Thunberg's speech on Twitter, and above it wrote, sarcastically, that "she seems like a very happy young girl looking forward to a bright and wonderful future. So nice to see!"

Thunberg seemingly took Trump's slight in stride. The next day, she updated her Twitter bio to read: "A very happy young girl looking forward to a bright and wonderful future."

I have moved on from this climate thing... From now on I will be doing death metal only!! https://t.co/mYqXxFuE77