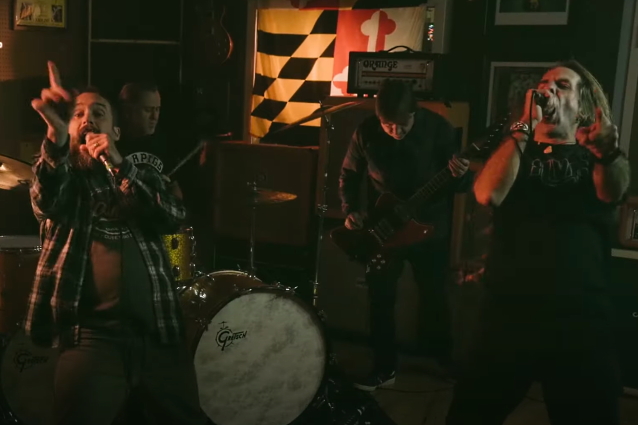 Maryland rockers CLUTCH have released their new single "Passive Restraints". "Passive Restraints" originally appeared as the title track to the band's second EP released in 1992. This newly recorded version is part of the "Weathermaker Vault Series" and features guest vocals by Randy Blythe from LAMB OF GOD. CLUTCH and Blythe have collaborated on this track live for several years now, the last time at European festival appearances in the summer of 2019. The upcoming official video for the song was directed by David Brodsky (THE BLACK DAHLIA MURDER, PAPA ROACH).

"'Passive Restraints' was one of the first CLUTCH songs I wrote lyrics to," states CLUTCH frontman Neil Fallon. "It was a staple of CLUTCH sets for years but fell by the wayside as we wrote more and more songs over the years. When we toured with LAMB OF GOD a few years back, Randy would often ask us to bring it back into rotation. We dragged our feet, and finally, we caved. And we were glad we did. The last time CLUTCH played Copenhell, Randy joined us on stage to perform the song. We decided to re-record it for the 'Weathermaker Vault Series' and thought it was only fitting to have Randy join us."

"When CLUTCH asked if I wanted to sing an older song with them during our 2016 tour together, I knew immediately which one I wanted to do — 'Passive Restraints'," adds Blythe. "We performed it in Milwaukee, then again a few years later at Copenhell fest in Denmark, and I had a blast both times.

"I think they were a bit surprised I chose a song released in 1992, but I've been a fan for a long time. I've followed their development as a band since the early days and have enjoyed every album, but as a musician, I know sometimes it's fun to dust off something you haven't played in many years and see how it sounds. The song holds up to this day, and I was honored to sing on its re-release."

The single "Passive Restraints" comes from the upcoming album "WeatherMaker Vault Series Vol. I", due out on Friday, November 27.

This past September, CLUTCH drummer Jean-Paul Gaster confirmed to the "Cobras & Fire" podcast that he and his bandmates have slowly commenced the songwriting process for the follow-up to 2018's "Book Of Bad Decisions" album.

"On paper, you would think that this would be a creative time for artists, and maybe there are artists out there who are doing some of their best work ever right now, writing their best songs," he said. "I can tell you, for us, we've concentrated mostly on trying to figure out how to stream shows and figure out that technology. And while we have started to write, we are not living in very inspiring times. So it's difficult to get those wheels turning. Not only that, but also knowing that once we have this recording done, it's difficult to say when we're gonna be able to get out there and play these songs."

He continued: "We've always been a band that writes songs and immediately puts these songs into the set. That gives us the opportunity to play these things, and the songs take shape. We really rely on that live environment to bring those songs to life, because oftentimes what sounds great in the jam room does not translate to the live setting. And you can tell that within the first 10 seconds of playing that song; you know right away if something works or not. And so I think we're missing that element. That's not to say that we will not record. But I think for us the challenge is gonna be how do we try to emulate that with this new dynamic. And we're gonna figure that out, no doubt."

Asked if Vance Powell, who produced "Book Of Bad Decisions", will be back to helm the next effort, Gaster said: "[It's] too early to say. We very much enjoyed our time with Vance Powell. I think Vance Powell is probably one of the most talented engineers we've ever worked with. I was continually blown away by the tones that he was able to pull out of the band. And for that reason, that record in particular is one of my favorites. But it's hard to say. We have to really get a collection of songs, we have to sort of get a vibe going of where this material might head before we start making decisions about who [will produce the album] and where we're gonna record."

"Book Of Bad Decisions" was recorded at Sputnik Sound studio in Nashville, Tennessee. The record sold 26,000 copies in America during its first week of availability, giving the group its third consecutive Top 20 album on the Billboard 200.