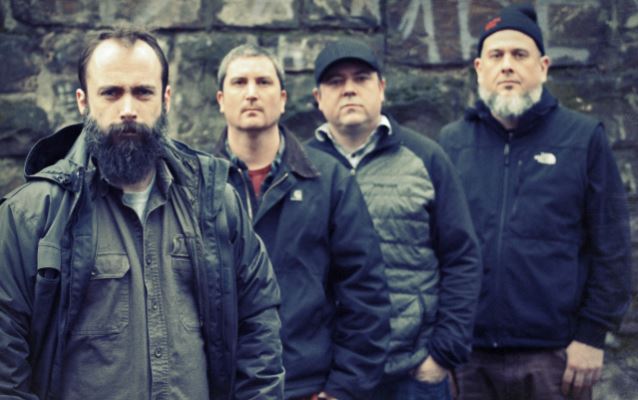 Maryland rockers CLUTCH have set "Psychic Warfare" as the title of their eleventh album, tentatively due in September via the band's own label, Weathermaker Music. Songtitles set to appear on the follow-up to 2013's "Earth Rocker" include "X-Ray Visions", "Firebird", "Quick Death In Texas", "Our Lady Of Electric Lights", "Monsters", "Decapitation Blues" and "Son Of Virginia".

CLUTCH frontman Neil Fallon tells Alexander Milas of TeamRock Radio 's "Metal Hammer Magazine Show" about the new album title: "'Psychic warfare' is a lyric from the first track, 'X-Ray Visions'. It's about a guy holed up in a motel for unexplained reasons, and he's under great duress, being attacked by psychically-empowered agents of unknown origin. At least, that's the back story I have in my head."

According to Fallon, the "X-Ray Visions" lyrical concept was influenced by Philip K. Dick, the science fiction author whose 1968 novel "Do Androids Dream of Electric Sheep?" was the basis for "Blade Runner". Neil says: "[Dick's] general philosophy and questions have always crept into my lyrics, because I share an interest in it. On 'Earth Rocker', 'Crucial Velocity' was definitely a Philip K. Dick song for me. On this record, 'X-Ray Visions' certainly is."

Fallon says that the secluded studio location was the inspiration for the song "Quick Death In Texas". He explains: "I was staying in a kind of unique, maybe 100-year-old property, by myself. I got spooked out because I come from the East Coast and the suburbs and I was out in the woods. That was the environment that brought out 'Quick Death In Texas' — and the locals."

In a recent interview with Pollstar.com, Neil stated about CLUTCH's forthcoming album: "There's nothing out of the ordinary of the CLUTCH canon [on the new CD]." He continued: "I think these songs were written so soon after 'Earth Rocker' that they have a lot in common. It's a faster record. It think it shares a bit of the sense of humor, lyrically, with 'Earth Rocker'. There are a lot of hooks on this record."

Fallon added: "It's hard for me to comment, because I'm still in the middle of it, still listening to mixes and stuff. I think it's another offering of our sincerest rock emotion."