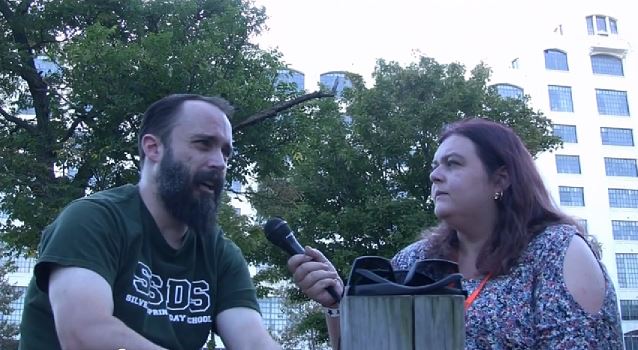 Kristyn Clarke of PopCultureMadness.com conducted an interview with vocalist Neil Fallon of Maryland rockers CLUTCH on September 27 at The Shindig Music Festival in Baltimore. You can now watch the chat below. A couple of excerpts follow below (transcribed by BLABBERMOUTH.NET).

On what it feels like for him as a performer to see so many people holding up their phones and filming the concert while he is up on stage:

Fallon: "First of all, do you really think those people are gonna spend much time watching those movies? They're not going to. They're gonna delete it when they run out of memory on their phone.

"Music recorded is a static thing. Every time you listen to 'Four Sticks' by LED ZEPPELIN, it's gonna sound the same, but if you have the opportunity to see a band, that live experience — unless they use a lot of pre-recorded tracks — is gonna be a one-time event. And if you're spending your time [at the show holding up your phone and filming the concert], you're not participating in it. At least that's the way I feel. I kind of treat concerts the way I do a dinner — turn your phone off, you know. I don't so irritated from the perspective of the stage. I mean, if someone wants to do that, fine, but justme, personally, I remember concerts much better from the '80s and '90s than I do a lot of these ones that have been, kind of, with the phone. Like, 'Oh, I'm here.' 'I'm here too.' 'What are you doing?' 'The same thing you are.' Who gives a shit? [Laughs]"

On the progress of the songwriting sessions for CLUTCH's follow-up to 2013's "Earth Rocker":

Fallon: "Well, that's our next thing. We've been writing some, and we've done some pre-production. We'll do another round of pre-production next month. The plan is to record it in January out in Texas and then have it come out hopefully no later than a year from now."

"We wrote a slew of songs a while ago that… pretty quickly after 'Earth Rocker', so [there were] some 'Earth Rocker'[-style] uptempo songs up there. We've written a couple of new ones that are kind of more down tempo. I think that's the fun part of writing a record, and it's also the most frustrating part — figuring out what it is.

"I'm so close to it, it's hard for me to be objective about it. We like to play new songs live on stage, 'cause that's the best laboratory. Things can sound awesome in your basement when you're six beers in, but if you do it on stage, that's a much more honest crucible."