CLUTCH's NEIL FALLON: Playing In Paris Two Days Ago Was The Most Moving Concert Experience I've Ever Had

Vocalist Neil Fallon of Maryland rockers CLUTCH has commented on the events of November 13 in Paris, France, when more than 129 people were killed in seven coordinated terrorist attacks.

In a post on his Instagram account, Fallon wrote: "I still don't have the words to speak about the evils that took place in Paris on November 13th. I doubt I ever will. Plenty has been said already. Some very moving words, some very ignorant. For myself, though, I find the commentaries on social media and online outlets to be too easy and too self-serving, however well-intended. I figured the best thing we could do was simply get on the stage and play some rock and roll. Having said that, it hasn't been easy. Not a show has gone by that I haven't thought about the EAGLES OF DEATH METAL, their fans, the crew at The Bataclan, the patrons of Stade de France and all the other victims who were simply enjoying a beautiful evening in Paris.

"A lot has been said about bands, particularly American bands, who have cancelled shows and tours. I do not fault them. Nor do I judge them. No one outside of those bands and venues knows the particulars of the circumstances. I do, however, find fault with those that judge them for doing so. It's too easy to proclaim 'what should be done' whilst sitting in a castle of online anonymity.

"If the promoters here in Europe had asked us to reschedule, CLUTCH would have done the same.

"I've been doing this for nearly 25 years now and [Friday] night's show in Paris was the most moving experience I've ever had while performing with JP, Tim, and Dan. Nothing out of the ordinary happened. People danced. People sang. People threw liters of beer across the room. By all accounts, it was a typical rock show. But these seemingly ordinary behaviors were extraordinary. The show wasn't about CLUTCH. It wasn't about rock and roll. It was about the fans. It was about Paris. It was about the indomitable spirit of humanity's best retaliating against its worst... with joy. However brief it may have been, I am so grateful to have been a part of that. 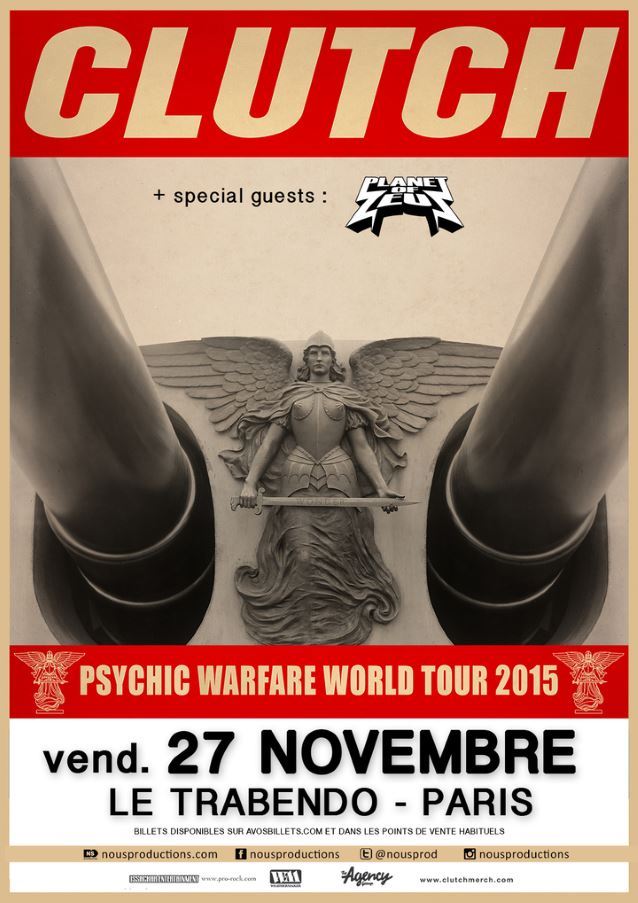