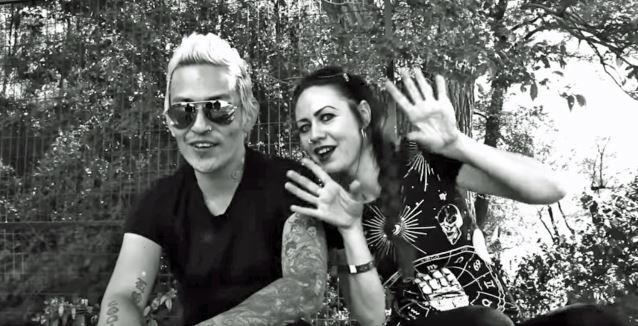 Yell! Magazine conducted an interview with COAL CHAMBER's Nadja Peulen (bass) and Miguel Rascón (guitar) at this year's Heavy Montreal festival, which was held last month in Montreal, Quebec, Canada. You can now watch the chat below.

Asked how the COAL CHAMBER members' different projects away from the band affected the sound of the group's comeback album, "Rivals", Rascón said: "All of our projects are vastly different. When we came into COAL CHAMBER again after 13 years, we decided to go, 'Hey, let's just do a record that how we sound. We don't care about the trends. And it's either gonna flop or be accepted.' And so far it's been accepted. I think people respect the fact that we didn't follow the musical trends, and we decided to keep it the way we sound. And so far so good."

He continued: "I know that genre [nu metal], whether it's mocked or accepted, there's still a big audience for it. So we kind of fill that niche right now. That simplicity and that groove. You know, you can't deny a groove — ever. RAGE AGAINST THE MACHINE and everyone does that groove, that little niche."

Miguel also spoke about the fact that COAL CHAMBER's music music oozes passion and sex appeal in a way that can't be matched by most metal bands. He said: "Absolutely. I agree with that a hundred percent, 'cause it's all about rhythm. You could compare it to sex. You're not gonna go blast beat — or you can, I guess. And there's nothing wrong with that [extreme] style or genre, but there's a certain sexiness there [in COAL CHAMBER's music]."

"Rivals sold around 7,100 copies in the United States in its first week of release to land at position No. 80 on The Billboard 200 chart (which includes stream activity). The band's first CD in over thirteen years was recorded in part at Audiohammer studio in Sanford, Florida with producer Mark Lewis (DEVILDRIVER, CANNIBAL CORPSE).