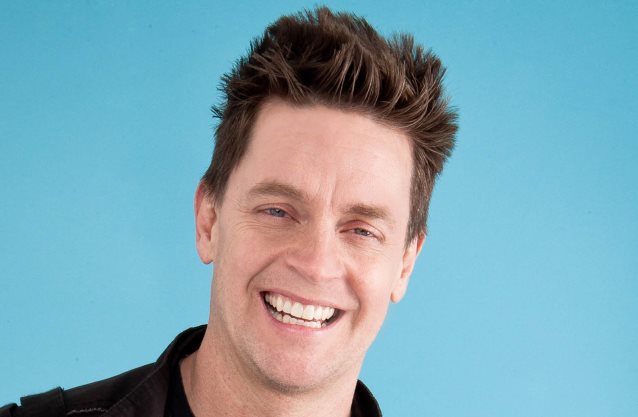 As a lifelong hard rock/metal fan, Breuer has often incorporated loud music into his comedy stand-up, so it seemed only natural for him to take the next step and start his own band. Over the past few years, the Jim Breuer band has performed at premier festivals such as Rock On The Range, the Motörboat cruise, METALLICA's Orion Music + More, Sonisphere, and the main stage at Wacken Open Air in Germany. Now, under a new moniker (JIM BREUER AND THE REGULATORS),the group plans to release its debut in the spring. The CD, which is reportedly being produced by former ANTHRAX and current VOLBEAT guitarist Rob Caggiano, will include a guest appearance by AC/DC singer Brian Johnson.

Breuer stated about his upcoming album: "I think the music is going to be very respectable. I think it's going to surprise most people. I think the hard rock, metal world will embrace [it], where many other people who thought it was going to be really funny will think, 'Oh, he really wasn't that funny in it. He wrote some real songs.' So, I don't know what to expect from it, but it's definitely hard rock and metal for my generation."

Metal Blade Records chairman/CEO Brian Slagel comments: "We are super excited to be working with Jim Breuer. His is a comedy legend and this album is something truly special. You will be surprised in a good way when you hear it!"

Asked if he gets more starstruck when he meets certain musicians as opposed to meeting legendary comedians he idolizes, Breuer said: "I definitely, hands down, 100 percent am more comfortable around the rock guys because I just instantly feel like I relate to them much easier. We're not competing, there's no animosity, there's a general respect and a mutual respect for one another. I really enjoy being in the rock world. They're funny, 90 percent of them are funny. And they're guys that you would just hang out with and it's awesome."

Breuer recently launched a new podcast series called "The Metal In Me". The first three episodes are already online with more to be added each week, about finding the comedy, reality, and metal in us all — the perfect mix in life!

Named one of Comedy Central's "100 Greatest Stand-Ups of All Time," Breuer is one of the most recognizable comedians in the business, known for his charismatic stage antics, dead-on impressions, and family-friendly stand-up. Breuer got his big break in 1995 when he joined the cast of NBC's legendary "Saturday Night Live", where he became a fan-favorite for his original character "Goat Boy" and his dead-on impressions of actor Joe Pesci. Since then, Breuer has starred in popular films, hosted various TV shows, and appeared on numerous programs as a special guest — in addition to keeping busy on his current comedy tour.