Bassist Tim Stahlmann from Melbourne, Australia's CONTRIVE was injured in a motor accident while on holiday in Koh Samui, Thailand. The band was due to hit the stages of Bangkok next week for its first tour of Asia, including a support with PARKWAY DRIVE. However, hospital X-rays have confirmed that Tim has broken his collarbone, forcing him to pull out of the trek.

The Haug brothers of CONTRIVE have managed to quickly secure the bass duties of Greg Shaw from Adelaide's TRUTH CORRODED, a band which coincidentally finished a recent tour of Asia that included shows in Bangkok. Greg will also play a warm-up show with CONTRIVE on Wednesday, February 4 at The Arthouse Hotel in Melbourne.

A video message from the Haug brothers for Thai fans leading up to CONTRIVE's Living Unseen Tour 2009, which kicks off Friday, February 6, can be viewed below. 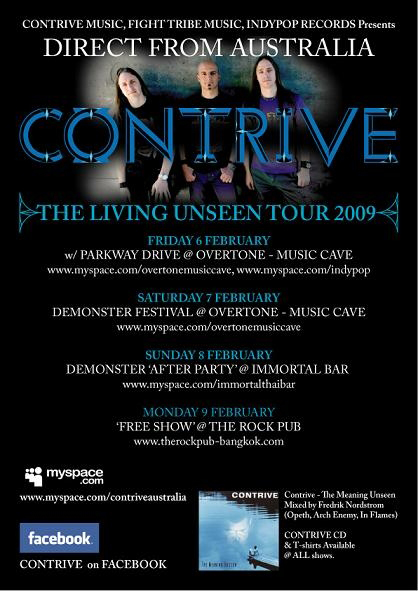