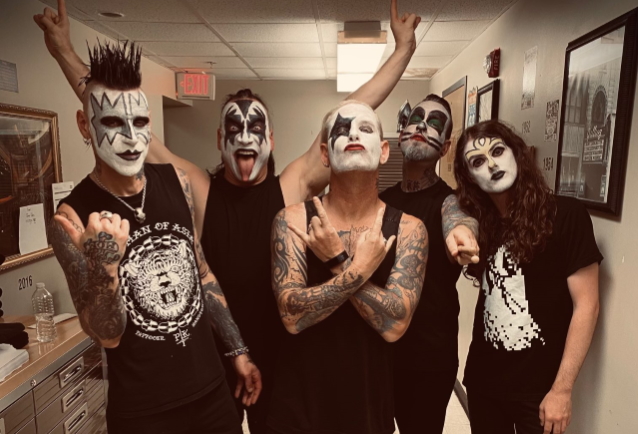 Earlier today, the SLIPKNOT and STONE SOUR frontman took to his Twitter to share a pre-show photo of him with his solo band taken on Monday, and he included the following message: "Last night we had to pull off a special show in Springfield, MO, because our @cherrybombsrock couldn't perform. If you have a ticket stub, digital copy or printed ticket from last night, it gets you into tonight's show for free. So come see us all get crazy! Take care out there!"

Corey and his band are scheduled to perform tonight at Grinders KC in Kansas City, Missouri.

Taylor kicked off his "CMFTour" summer 2021 tour on August 6 at the House of Blues in Las Vegas, Nevada. The shows find Corey and his band running through anthems from his critically acclaimed solo debut "CMFT", choice cuts from his SLIPKNOT and STONE SOUR catalogs, and various covers and surprises.

2021 has been as busy as ever for Taylor. Having recently wrapped the sold-out spring leg of his "CMFTour", which he documented in a series of "Tour Diaries" for Rolling Stone, Taylor also released an inspired new cover of CROSBY, STILLS, NASH & YOUNG's "Carry On" and fronted GROUND CONTROL, a supergroup also comprised of Taylor Hawkins (FOO FIGHTERS),Dave Navarro (JANE'S ADDICTION) and Chris Chaney (JANE'S ADDICTION) performing at "The Bowie Celebration: Just For One Day" in tribute to the late David Bowie.

Last night we had to pull off a special show in Springfield, MO, because our @cherrybombsrock couldn’t perform. If you have a ticket stub, digital copy or printed ticket from last night, it gets you into tonight’s show for free. So come see us all get crazy! Take care out there! pic.twitter.com/1zEH0QO6NH