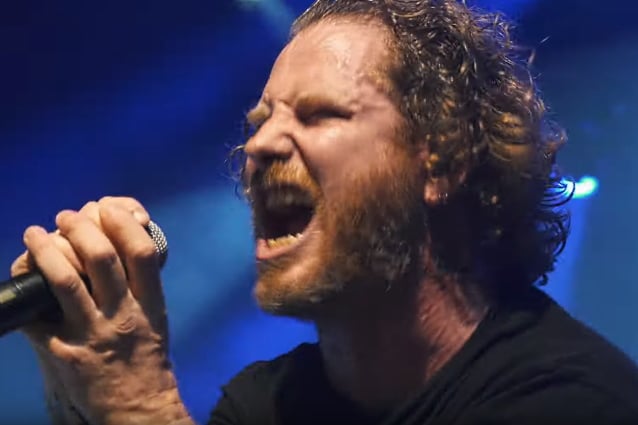 In a brand new interview with the Irish Times, Corey Taylor was asked if a successful band like SLIPKNOT could survive just on royalties from streaming sales. He responded: "You could if the streaming system wasn't set up the way it is. You are being paid less than pennies. In the United States, they have passed the legislation (the Music Modernization Act 2018) but it is being appealed. I am hoping that it will be struck down. If the streaming systems paid more online with how publishing in radio pays — people could make a living."

He continued: "I have had friends of mine who have had to retire, and they are popular bands, because they can't make a living. Mid-card bands and lower, it is hard for them. It almost pays better to play the local pub and do the door deal. You make more money doing that than making an album. Labels don't take the same chances but they are taking the lion's share of the money because of the way it is set up.

Asked what the going rate is for a million streams, Taylor said: "The lowest rate is YouTube. A million streams on YouTube is 0.04 per cent of a penny. On a million streams you get $400 and that’s just me doing shitty math in my head. People can't live on that and there's not a lot of people who get these numbers. The majority of this goes to the record label anyway. The streaming services are not willing to pay the talents who write the songs and makes the music and yet they are sitting on billions of dollars. They are buying whole blocks of buildings and then taking over floors in there and yet they don't want to pay the people who made the money for them. It's insane. It's tough all over in a lot of ways. Something has to change. I don't know what that will be."

In January 2019, the Copyright Royalty Board ruled the royalties songwriters receive from on-demand subscription streaming would jump 44 percent over the next five years. Spotify, Google, Pandora and Amazon — four of the major U.S. streaming services — later appealed the ruling, saying that it "harms music licensees and copyright owners."

Last year, Corey told Rock Feed that the vast majority of artists don't own their masters (original or master recordings before the revenue split is calculated between involved groups) — the record labels do — which has affected their bottom line greatly.

"It's a very occurrence [that a group will own its masters]," he said. "I can think of maybe three bands that have been able to do that. METALLICA is one. MÖTLEY [CRÜE] is the other. I'm not sure about AC/DC. But I know there are a handful of bands that actually own the masters and the rights for them. But we are talking about bands that not only own their masters, they also own the label that they release stuff out of. METALLICA has Blackened; MÖTLEY has Motley Records. It's a very small class or group. You have to be done with your contracts — the original that you signed in the first place — and ready to go on to an independent basis to be able to do anything like that. And for bands like us, and probably a million other bands out there, you just simply don't have the money to do it."

Back in 2015, Taylor said that record labels were continuing to lose the digital music battle or piracy war because they couldn't "catch up with the technology." He said during an appearance on the "Eddie Trunk Podcast": "On one hand, you've got people who are streaming, but then they use that to decide whether or not they wanna buy the album, as opposed to illegal downloading. But then there's the other side of it where people are kind of using it as, basically, satellite radio, where it's, like, 'I'm just gonna listen to this.' But people still pay a subscription for it. So, in one way or another, the economy is still working. It's just that… We can't catch up with the technology; that's the problem. There's so many innovations that the powers that be can't figure out… they can't get ahead of it."