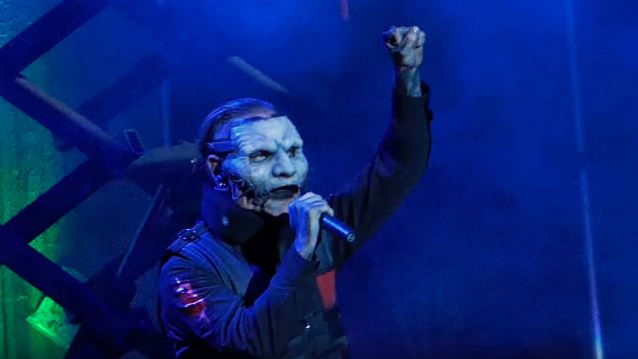 SLIPKNOT frontman Corey Taylor has had another fan thrown out of one of the band's concerts, and the whole incident was once again caught on tape.

During SLIPKNOT's August 13 show at the Concord Pavilion in Concord, California, Taylor apparently took issue with one particular member of the audience, having him personally ejected from the venue for reasons that are not clear.

In the clip below, Taylor can be seen pointing out the rowdy fan in sea of flailing limbs and shoes and ordering security to "get him the fuck out!"

One Redditor said that security had to wrestle the fan in question out of the crowd, while another wrote: "I was there! All I heard was, 'That motherfucker with the glasses. Get him the fuck out of here.' This is my fourth show and I've never seen that."

Taylor made headlines last month for having a concertgoer removed from the band's gig in Toronto. Fan-filmed video footage showed Taylor pointing at someone in the crowd and saying into the mic, "You don't show me shit, you little pussy." Within 15 seconds, security escorted the person out, with Taylor waving and saying, "Bye bye, bitch."

He later called the person a "cunt" on Twitter and explained that he has been "doing this too long to deal with that disrespect."

One user on SLIPKNOT's Reddit page claimed the fan was hurling insults at Corey and flipping him off, while another wrote that the man was attacking people in the crowd for no reason.

In a separate incident earlier last month, Corey smacked the phone out of the hand of a texting fan during a SLIPKNOT concert. The singer later explained his action by tweeting, "If you're gonna text, stay home."

Taylor has discussed his dislike for people using their phones at concerts in an interview with Detroit radio station WRIF, saying, "So many people have their faces glued to their phones... get off your phones and pay attention to what the hell you're doing."