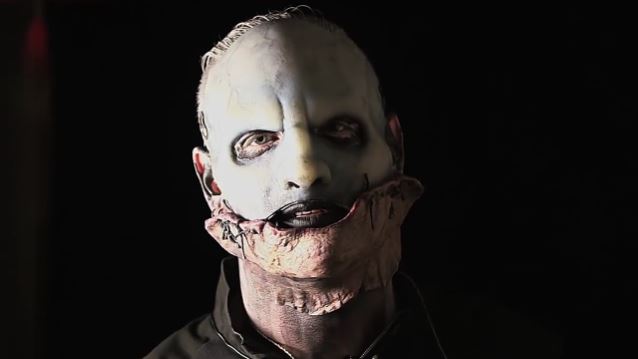 SLIPKNOT frontman Corey Taylor has clarified his recent comments in which he said that "might step away" from the band at some point in the future.

Asked on the "Someone Who Isn't Me" podcast if he thought he will ever get "tired of touring," Taylor replied, "Honestly, if you'd asked me a year ago, I would have said no. But… I'm just kind of starting to. I'm forty-two; I'm not young anymore. And as willing as my will is, I'm just beat up, man. I mean, I might as well be sixty in SLIPKNOT years, for Christ's sake."

Taylor added: "I don't know if I would retire. I might step away from SLIPKNOT at some point, just because the way the music is, and that sense of energy, I don't know if I could be able to do that into my fifties. And I would never want the band to feel like I was holding them back, because I just couldn't physically do it. So that means I wouldn't completely quit music; I would probably just step away from SLIPKNOT."

After his original comments were picked up by various web sites, Taylor took to his Twitter account to explain what he meant. He said: "I'M NOT QUITTING SLIPKNOT. Listen to/read interviews IN CONTEXT not out. I talk about time off. This is why I dislike 'cut n paste' journos."

During the "Someone Who Isn't Me" interview, Taylor also discussed how the band might progress musically in the coming years, saying, "At some point, we'll have to evolve again. 'Cause we've evolved with every album… I think, in the future, we'll make it less about the angst and the insanity and more about the creativity."

SLIPKNOT has hinted that its next studio effort could be a double concept album. The group's last set, ".5: The Gray Chapter", came out in late 2014 and was the band's first effort in six years, following the 2010 death of bassist Paul Gray and the 2013 dismissal of drummer Joey Jordison.

Taylor's main focus in 2017 will be STONE SOUR, which has fourteen new songs written and recorded in demo form for the follow-up to the band's 2012/2013 double concept album, "House Of Gold And Bones".

I'M NOT QUITTING SLIPKNOT.
Listen to/read interviews IN CONTEXT not out. I talk about time off. This is why I dislike 'cut n paste' journos.