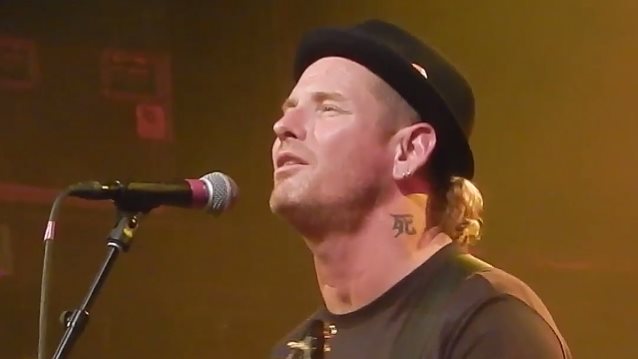 During the question-and-answer portion of his August 9 solo concert at the Irving Plaza in New York City, SLIPKNOT and STONE SOUR frontman Corey Taylor was asked about the social stigma that is associated with depression, addiction and trauma, particularly in the wake of the recent deaths of Chester Bennington and Chris Cornell.

"For those of you that don't know, I've fought depression my whole life," Corey said (see video below). "It's been something that has just been a part of my life. And I didn't even realize it was something that I had to deal with until it was later on when I had the right people around me to kind of see that I was struggling with it and then they helped me get help. So I've not only been able to develop the skills to deal with it and go on with it, but I also know that it's important to not only talk to people but also let people know that they're not alone when they're dealing with it."

He continued: "It's the easiest way to succumb — to feel isolated, to feel like you're the only one feeling that way. And it's not just people who deal with depression — there are people coming back from overseas with PTSD, there are people who are coming back loaded with insane issues that it's easy for people to forget that you can cocoon yourself and close yourself away from the world. So my message is, if you're feeling that, if you're struggling with it, do not be afraid to reach out to people, do not be afraid to find [help].

"One of the worst things that ever happened was losing people like Chester," Corey added. "He was a good friend of mine, and I was as stunned as you guys were. Because I knew how sweet he was and how open he was and how fucking amazing he was as a person. And the fact that he fought and fought and fought until he couldn't fight anymore broke my heart. So for him, and for people like Chris, who I looked up to, and for friends of mine who I know have taken their own life, I am taking that and I am turning it around and saying not one fucking more!

After Cornell died in May, Bennington wrote a letter thanking him for inspiring him and hoping he would find peace in "the next life."

Corey Taylor's new book, "America 51", which is subtitled "A Probe Into The Realities That Are Hiding Inside 'The Greatest Country In The World'", was released on August 8 via Hachette Audio as a digital download, and from Da Capo Press as hardcover and ebook editions. In the book, Taylor sounds off on American history, religion, racism, Donald Trump, the Clintons and Reagan, as well as reflects on what it's like to experience America while touring in a band.