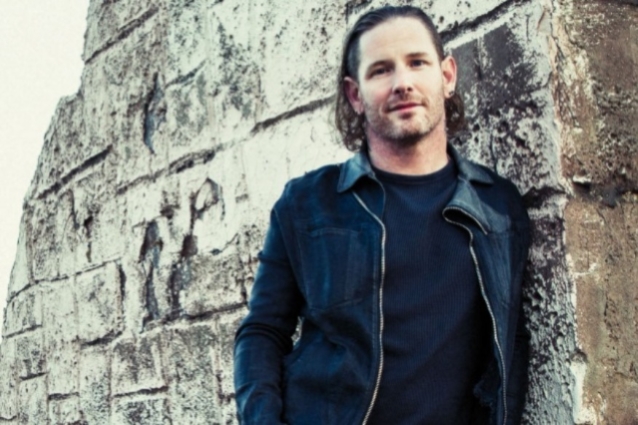 COREY TAYLOR Mourns Loss Of Grandmother Who Raised Him

Corey Taylor has paid tribute to his grandmother who has just passed away. The SLIPKNOT and STONE SOUR frontman shared a couple of photos of Thelma Taylor on Instagram and included the following message: "She was my hero. My rock. My everything. She raised me. Taught me to be kind but tough. Work and encourage others to do so. I've never known a day without her in this world. My heart has broken. I loved her so much. And I will miss her every day. She was an incredible woman. And I owe her everything. I love you, Gram. Thelma Taylor 1926-2018."

In a 2009 interview with Kerrang! Radio, Corey called his grandmother "the strongest influence" he had while he was growing up. "She instilled in me my work ethic, my attention to loved ones," he said. "She was really my proper mom, I love my mother but it was such an insane way to grow up, just brutally all over the place. My grandmother was my rock, she was my foundation, she was my stability, she was my safe home. That really had a lot of impact on me, especially growing up, and even today.

"My grandmother is so nuts — she retires from one place after working there for 25 years, takes a year off, gets bored, goes back to work at a completely different place and has now worked there almost 20 years! I'm like, 'What are you doing? You can barely walk now but you're still working, are you out of your mind?' That, to me, that's big."

Taylor also credited his grandmother for helping shape his musical tastes. "She had literally hundreds of Elvis 8-tracks — which people have probably never heard of — but she had boxes of these things and I can remember my first stereo was actually the only stereo that she ever had and it had a record player and an 8-track player, so I really started listening to a lot of Elvis when I was younger," he said. "When I moved in with her, I inherited those, so I was stoked. I was, like, 'Look at all these Elvis 8-tracks! Woohoo!' But she had a lot of vinyl too; I can remember listening to the STATLER BROTHERS when I was a kid. My grandmother was a big country fan, so I grew up on a lot of country, it was Iowa. I can remember listening to STATLER BROTHERS, the OAKRIDGE BOYS. I was the biggest fan of 'Elvira'. Are you kidding me? That song was fantastic!

"My grandmother bought me 'Somewhere in Time' by IRON MAIDEN, and 'Girls, Girls, Girls' by MÖTLEY CRÜE, so those were my first two tapes and I memorized not only the liner notes and the music, but everything because you grew up with MTV, at that time you could see those bands, those were my bands."

Taylor and his STONE SOUR bandmates are supporting Ozzy Osbourne on the initial North American leg of the legendary vocalist's "No More Tours 2" tour, which kicked off August 30 in Allentown, Pennsylvania.

She was my hero. My rock. My everything. She raised me. Taught me to be kind but tough. Work and encourage others to do so. I’ve never known a day without her in this world. My heart has broken. I loved her so much. And I will miss her every day. She was an incredible woman. And I owe her everything. I love you, Gram. Thelma Taylor 1926-2018