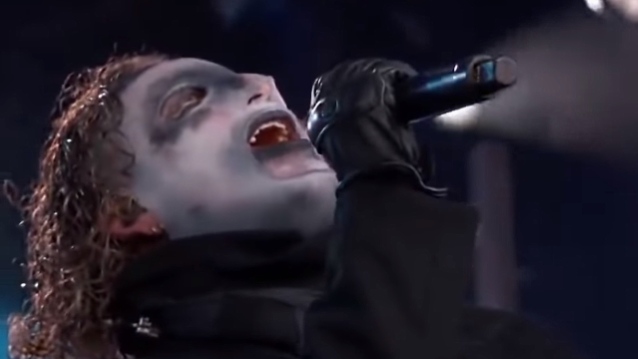 COREY TAYLOR On New SLIPKNOT Album: 'It Is Probably The Furthest We've Pushed The Boundaries Of Creativity And Experimentation'

SLIPKNOT frontman Corey Taylorspoke to BBC Radio 1's "Rock Show With Daniel P. Carter" about the band's upcoming sixth album, "We Are Not Your Kind". Due on August 9, the disc was once again recorded at a Los Angeles studio with producer Greg Fidelman, who engineered and mixed SLIPKNOT's 2004 album "Vol. 3: (The Subliminal Verses)" and helmed 2014's ".5: The Gray Chapter".

"As a whole — and I can say this honestly — it is probably the furthest we've pushed the boundaries of creativity and experimentation, while also not losing our identity," Corey said. "There are bands out there who, they go for all of that experimentation and they forget who they are — they forget that there's an audience that wants to hear a certain type... It doesn't have to be the exact thing, but there has to be a certain emotion that they are looking for, that they wanna hear... There has to be that touchstone. You can go as far out as you want, but you have to be able to pull them back to that feeling that made them fans in the first place. And I really think we did that with this album. We not only went places that we've hinted at, musically, over the years, but never really went full-bore, but we're also doing heavier things than we've ever done."

Taylor continued: "We're still a band that has always just written music for us. If we're not impressed by it, we're not putting crap out, you know? Even stuff in retrospect where we may take a listen to it later and go, 'Ah, I don't know if that was us.' But at the time, we're absolutely backing it, no matter what. So as long as we continue to write music for us first and the audience second, that's how you keep that excitement."

Corey also talked about SLIPKNOT's new live show, which the band debuted on June 7 at Rockfest in Hyvinkää, Finland.

"It's been really good," he said. "The set's been pounding. The show looks amazing. We're all playing really well. We're getting bigger pops from things like [last year's standalone single] 'All Out Life' than we do from stuff like 'Duality', which is nuts… Honestly, it's everything that we've wanted to do for years, and we just never had the budget and we had also had a lot of people around us telling us we couldn't do it… We want people all over the world to see the same show. If there's an A and B rig, they're identical. We don't wanna come in with some tired, half-assed bullshit. It's not who we are, and we've had to contend with that almost our entire career. So not only is it interactive — there's video, there's fire — but the whole set looks like an industrial complex. This is our attempt to create some IRON MAIDEN stuff, which is something we've been trying to do for a while."

SLIPKNOT's European tour will run through a July 5 appearance at the Resurrection Fest in Spain. It will be followed by the "Knotfest Roadshow" headline tour of North America. VOLBEAT, GOJIRA and BEHEMOTH will join as special guests on all dates. Produced by Live Nation, the 29-city outing will kick off July 26 in Mountain View, California at Shoreline Amphitheater and continue through September 8 where it will conclude with a performance at Cynthia Woods Mitchell Pavilion in The Woodlands, Texas.