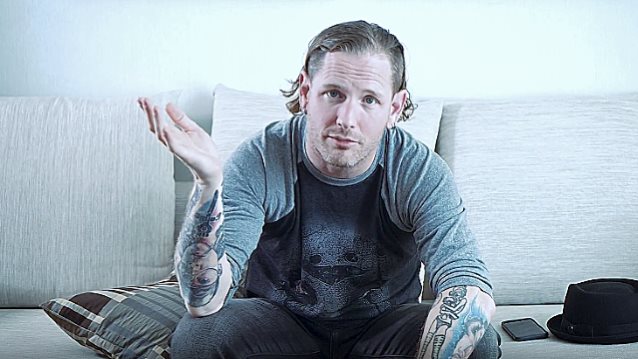 COREY TAYLOR On Performing Live: 'I Don't Get Nervous, But I Get Anxious'

In a brand new interview with Germany's Metal Hammer magazine, SLIPKNOT and STONE SOUR frontman Corey Taylor was asked if he suffers from stage fright. He responded (see video below): "No. [Laughs] You know, the funny thing is I still get anxious before shows. I don't get nervous, but I get anxious. I'm excited to just get out there. I just love performing for people. I think the only time I've really had that [stage fright] was my very first show — my first real show — with STONE SOUR. It was '92. 'Cause before I had done little gigs here and there, but there was nobody there, so it didn't really matter. With STONE SOUR at the time, I was not only singing, but I was playing guitar and playing lead. So I was kind of like [doing] triple duty and super nervous about it. So I didn't know to bring water with me on stage — I did whatever — so my throat got super dry and I was cracking all over the place. It was brutal. But by the end of it, it was cool. We had such a great time that I had the bug, man. I was, like, 'We've gotta do this.' We got a new lead guitar player, so I could just sing and play guitar if I needed to. And that was. And then the rest is history."

STONE SOUR's new album, "Hydrograd", will be released on June 30 via Roadrunner. The disc was recorded at Sphere Studios in North Hollywood, California with producer Jay Ruston, who has previously worked with ANTHRAX and STEEL PANTHER.

STONE SOUR will be special guests of KORN on the latter act's "Serenity Of Summer" trek, which starts on June 16 in Salt Lake City and wraps on August 2 in Cleveland.