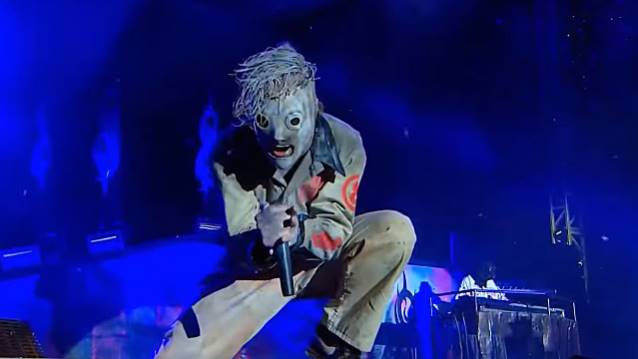 COREY TAYLOR On Recording New SLIPKNOT Album: 'We Knew It Was Gonna Be Heavy'

According to The Pulse Of Radio, SLIPKNOT has finished recording its fifth studio album and first since 2008's "All Hope Is Gone". The disc is also the band's first without late bassist Paul Gray, who died in 2010, and drummer Joey Jordison, who was dismissed in late 2013. Singer Corey Taylor told "HardDrive" host Lou Brutus about recording for the first time without two key members. "It was interesting," he said. "We knew it was gonna be heavy. We knew it was gonna be one of those things where it's like, 'Okay, we're in uncharted territory right now, so what do we do?' You know. And Jim [Root, guitarist] and Clown [Shawn Crahan, percussionist] really stepped up, you know. They kind of started leading the charge and really getting stuff together. So by the time we really got into the studio, we had a really great template of music to check out."

There is no word yet on the album's title or release date, but a single is expected to arrive sometime soon.

SLIPKNOT has announced that the second edition of its Knotfest event will take place on October 24-26 in San Bernardino, California. The Iowa-based band will headline two of the three days, Friday and Saturday, playing a completely different set on each night. More than two dozen other acts are scheduled to appear, including FIVE FINGER DEATH PUNCH, VOLBEAT, OF MICE & MEN, DANZIG, ANTHRAX, KILLSWITCH ENGAGE, IN THIS MOMENT, HELLYEAH, ATREYU, SUICIDE SILENCE, MISS MAY I, TESTAMENT and many others. Friday night's show will be exclusively for fans who buy VIP or camping packages.

Fans who purchase tickets to Knotfest will receive a digital copy of SLIPKNOT's new album when it's eventually released.

The band will also stage Knotfest Japan on November 15-16 in Tokyo.