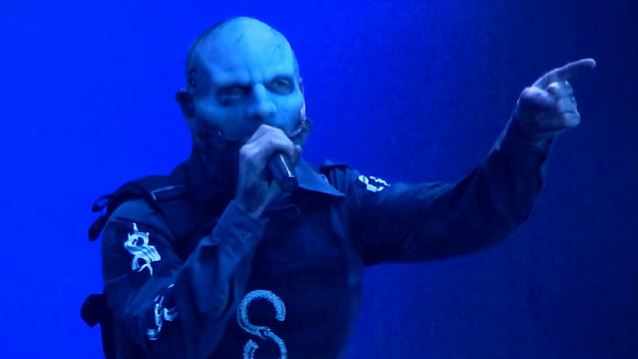 COREY TAYLOR On Use Of Phones At Concerts: 'People Need To Unplug And Realize That They're Missing Their Lives'

SLIPKNOT and STONE SOUR frontman Corey Taylor has slammed people who spend an exorbitant amount of time looking at their phones, saying that "they're missing their lives."

Taylor, who has had an active social-media presence through his personal Twitter and Facebook accounts, also believes that people who hold up their phones and film entire concerts while he is up on stage are "not enjoying" the show.

Speaking to the WRIF radio station, Taylor said: "I enjoy Twitter, because there's no pressure like [there is on] Facebook. I don't even run my own Facebook — somebody else does, and mainly just to kind of retype what I put up on Twitter, to be honest. But I have a lot of fun with Twitter, because you've got a maximum of 140 characters, and I can kind of get in and get out, and everybody just kind of retweets now anyway; hardly anybody puts anything out there. So it's easy; I don't have to sit on it all day, like most of these zombies do."

He continued: "So many people have their faces glued to their phones and they're not paying attention, I point and laugh anytime I see somebody trip walking down the street, and I'm brutal — I mean, I'm brutal. It's loud, it's obnoxious, there's a lot of pointing, I'm asking people, 'Did you see that?' I love it. I think it's funny."

Corey added: "Get off your phones and pay attention to what they hell you're doing."

Asked if he sees a lot of people looking at their phones at SLIPKNOT concerts, Taylor responded: "I see it every once in a while. People don't do it so much at our shows, and if they do, they do it from quite a ways back, because I empty whole water bottles into people as soon as I see them staring at their phone or tweeting or whatever."

He continued: "There was this one poor girl, and god bless her, she was a fan, but at the same time, she wasn't being very covert about it. So I emptied four bottles into her, and oh my God, it had to have broken her phone. And then she was just bummed for the rest of the night, and I just kept shrugging at her, going, 'Hey, it's a live show. Pay attention, or don't be here.'

"So, yeah, I don't see it as much anymore, because I think I've made the statement that I will ruin your phone if you do that in front of my show."

Taylor also lamented the fact that concerts have turned into photography/video sessions, with videos being published on YouTube and photos on various social media sites within hours of the shows' completion.

"You're gonna come down there and film it, but you're not gonna enjoy it?" he said. "I mean, get outta here! Are you serious?"

He added: "People need to unplug and realize that they're missing their lives, dude. It's sad. And that may be me just being an old jerk, but I don't care. I don't care. Truth is truth; it doesn't matter what age you're at."

SLIPKNOT's new album, ".5: The Gray Chapter", sold around 132,000 copies in the United States in its first week of release to land at position No. 1 on The Billboard 200 chart. The CD arrived in stores on October 21 via Roadrunner.