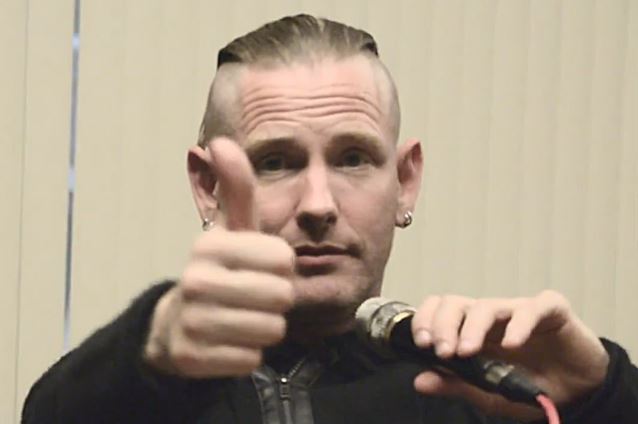 COREY TAYLOR Predicts 'A Renaissance For Big Frontmen' In Rock

Earlier this week, Ryan Daniels of Kilpop conducted an interview with SLIPKNOT and STONE SOUR singer Corey Taylor. You can now listen to the chat below.

Asked what he thinks will be the "next step for rock music," Taylor said: "I think there's gonna be a renaissance for big frontmen coming back. Like big showmen — kind of turning up the personality, but not in a douchey way. It can get kind of weird when you have too much personality. I think it'll be kind of a marriage between the two, where when you're onstage and you're doing the show, it's all about that big show and making sure that everybody's having a great time. Then offstage, you kind of have that self-effacing… you take less credit, you give more credit to the people in the band and the people who help you. That's what I think will be the marriage of… Like, more realistic when it comes to… Instead of putting on a persona to go onstage, you're just going out and you're being a bigger part of your personality. And then when you come offstage, you calm down a little bit. I think that might be the next evolution of the modern rock frontmen."

When pressed if he thinks someone like Mick Jagger (THE ROLLING STONES) is a good example of the kind of frontman that he is talking about, Taylor said: "Well, I've never met Mick, so I don't know how he is behind the scenes or whatnot. But maybe. I mean, he seems like he'd be a really nice dude. But then again, sometimes those egos, they go unchecked and it gets a little crazy. And like I said, I don't know Mick from anybody. He could be really, really cool behind the scenes or whatever. So I would say yeah, absolutely — a little more in the Mick Jagger kind of mold."

STONE SOUR's new album, "Hydrograd", will be released on June 30 via Roadrunner. Taylor recently said about the full-length follow-up to "House Of Gold & Bones": "It is the best stuff that we've ever written. It's got a lot of different directions, but at its core it's very hard rock, almost in a modern/classic sense. There are some hints of punk in there. There's some cool hard rock/heavy metal. There's just all of these really cool elements that we've never maybe allowed ourselves to kind of go to."

STONE SOUR will also be special guests of KORN on the latter act's "Serenity Of Summer" trek, which starts on June 16 in Salt Lake City and wraps on August 2 in Cleveland.