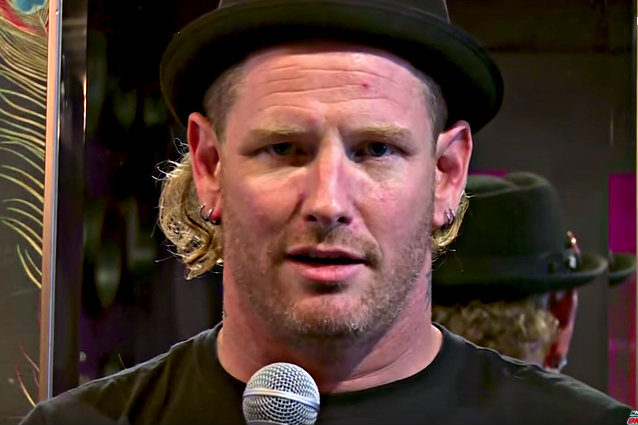 COREY TAYLOR Says DONALD TRUMP Is 'All Ego, All Talk And No Leader'

Corey Taylor has once again slammed Donald Trump, saying that the 45th U.S. president is "all ego, all talk and no leader."

The SLIPKNOT and STONE SOUR frontman, who has been vocal about his distaste for the billionaire real estate mogul for at least the past two years, spoke about the current state of America on the November 5 edition of "Whiplash", the KLOS radio show hosted by Full Metal Jackie.

"It's a very violent place right now," Taylor said (hear audio below). "Whether the pundits or the strategists or the columnists, whether they wanna admit it or not, there is a fractious factor going on in America right now. And our so-called president is not doing us any goddamn favors by catering to a very minuscule part of his base. And we saw that with that pathetic press conference because no one's gonna tell Donald J. Trump how to speak or be whatever. He put every goddamn foot in his goddamn mouth that he could possibly shove in there and he just basically showed that he's all ego, all talk and no leader."

Corey, who has previously described himself as "a socially liberal and yet fiscally conservative guy," continued: "I think we're kind of at a point where the rest of our government needs to step up, needs to show some type of leadership or they're all gonna go. Because the rest of us in the middle are tired of it — we're tired of the zealots on both sides, we're tired of the violence that erupts when both sides attack each other, for better or for worse. We're tired of this, because we're the ones carrying America, but we don't get any of the coverage. It's all the violence, it's all the sensationalism that gets all the coverage. Meanwhile, we're stuck in the middle going, 'Nobody represents us. Why don't we have a voice?'"

In addition to continuing to tour with STONE SOUR, Taylor is promoting his new book, "America 51", which was released on August 8 via Da Capo Press. Subtitled "A Probe Into The Realities That Are Hiding Inside 'The Greatest Country In The World'", it was described by its publisher as a reflection of how touring with bands has taught Corey "what it means to be an American in an increasingly unstable world."

Taylor told "Whiplash" that "America 51" is "my usual painfully honest, angry, hopefully a little humorous self, unfortunately, coming at a time when maybe we need a little bit to think about and a little bit to laugh about to kind of get us through the next couple years."

STONE SOUR's latest album, "Hydrograd", came out at the end of June.