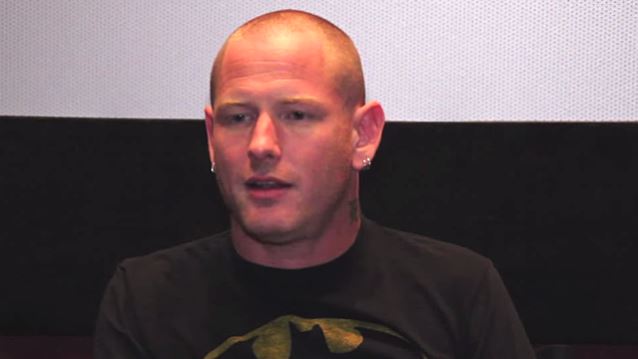 Sean Decker of Dread Central conducted an interview with SLIPKNOT and STONE SOUR frontman Corey Taylor before the October 22 world premiere of "Fear Clinic", the new horror flick which marks Taylor's first featured role in a film, at the Screamfest Horror Film Festival in Hollywood, California. You can now watch the chat below. A couple of excerpts follow (transcribed by BLABBERMOUTH.NET).

On his movie acting debut:

On reports that he is working on his own horror feature:

Taylor: "I was actually working on this before I did 'Fear Clinic' — just in a production capacity right now. I'm trying to sneak myself a role in it — just a little one, which I'll probably do a little more of. But it's exciting. It doesn't have a title yet. The script is done. And I'm working with a really great dude over at Scout [Productions] named Rob Eric, and he's a got a great mind for it, and we're both excited about it. And we're gonna try to break ground on it next year. 'Cause it's been a long time coming. The thing I learned about the movie industry [is] it takes a long time [for things to happen]. Snail pace is actually fast for this industry. [Laughs] But now it's getting very real, and we just actually had a meeting a couple of hours ago about what's next. And it's looking really good, man."

On whether he has any plans to direct a movie:

Taylor: "The funny thing is, I kind of got a taste for it… And I have ideas all the time. And until I started kind of dabbling in the film side of things, I would just kind of relegate them to short stories or whatever. But I actually… I came up with an idea for a script that I actually am almost done with; I've got about 80 pages done, which is, basically, a good start. And it's like a horror-comedy, to be honest. It's almost like 'Halloween' meets the movie 'Clue'. So there's a lot of dialogue. If I were to cast it, I would cast it with just great theater actors, because there are beats in the dialogue that just have to be seamless to make the humor work. But it's surrounded in this crazy thing that's going on. And it's completely out of the realm of reality, but I just love the idea of it. I showed it to my wife, and she just kind of stared at me for a second.