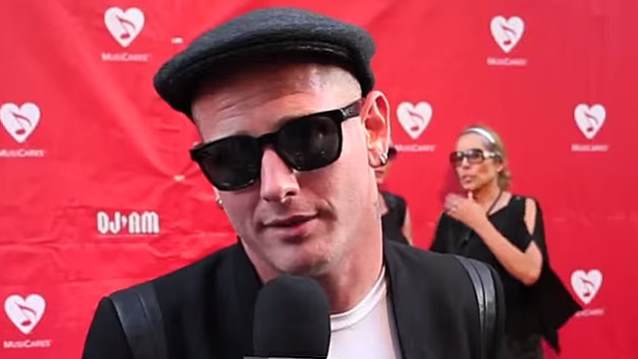 Robert Herrera of FrontRowLiveEnt.com spoke to SLIPKNOT and STONE SOUR singer Corey Taylor on the red carpet of this past Monday's (May 12) 10th annual MusiCares MAP Fund benefit concert, which honored BLACK SABBATH singer Ozzy Osbourne. Speaking about the progress of the songwriting sessions for SLIPKNOT's long-awaited follow-up to 2008's "All Hope Is Gone", Taylor said (see video below): "The album is coming along. I actually left the studio to come right down here. So it's a matter of time, trust me. It's gonna be rad… Everything is going exactly how it needs to go. So it's gonna be really awesome."

Taylor also addressed the long gap between SLIPKNOT studio albums, telling FrontRowLiveEnt.com: "The good thing is we've always been writing, so there's a ton of stuff that we're pretty stoked on. It's exactly what you want it to be."

As previously reported, SLIPKNOT is rumored to have recruited former MADBALL and AGAINST ME! drummer Jay Weinberg to assist them during the sessions for the band's new studio album following last year's departure of Joey Jordison.

Weinberg — the 23-year-old son of Max Weinberg (BRUCE SPRINGSTEEN AND THE E STREET BAND) — was most recently a member of AGAINST ME!, having played with the Florida-based act from November 2010 until December 2012.

SLIPKNOT announced in December 2013 that it had parted ways with Jordison, one of the band's founding members and key songwriters. The group posted a statement at its web site which read, "It is with great pain but quiet respect that, for personal reasons, Joey Jordison and SLIPKNOT are parting ways. We all wish Joey the best in whatever his future holds. We understand that many of you will want to know how and why this has come to be, and we will do our best to respond to these questions in the near future."

The statement added, "It is our love for all of you, as well as for the music we create, that spurs us to continue on and move forward with our plans for releasing new material in the next year. We hope that all of you will come to understand this, and we appreciate your continued support while we plan the next phase of the future of SLIPKNOT."

SLIPKNOT has not disclosed the reasons for Jordison's exit, although the drummer issued a statement in January saying that he did not quit the band.

SLIPKNOT's forthcoming CD will be the band's first since the 2010 death of bassist Paul Gray.