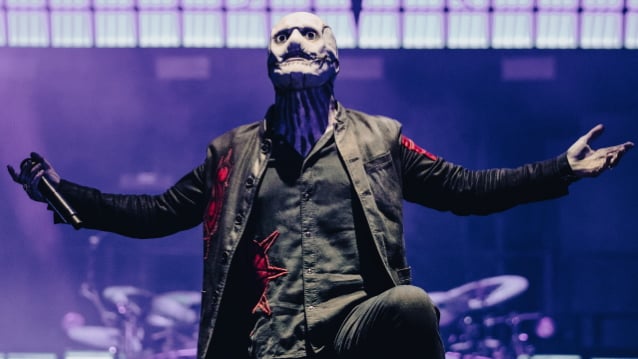 SLIPKNOT frontman Corey Taylor spoke to Lou Brutus of HardDrive Radio about the progress of the recording sessions for the band's follow-up to 2019's "We Are Not Your Kind" album. He said (as transcribed by BLABBERMOUTH.NET): "When we started first putting the new music together, it was a lot of flying around, people doing it in certain spots and trying to get the best out of it even though we were in the confines of lockdowns and stuff. So it was tricky. But we had a great producer with Joe Barresi, and he knows how to get the best out of pretty much any band that he's ever worked with. He's super rad and loves what we do, which sometimes that's all you need — is just somebody going, 'We're gonna do this.' So he would come into town so I could do the vocals. He would fly out and get the guys together to do the guitars and stuff, get them together with [drummer] Jay [Weinberg] while the drums were going on. We were able to really kind of pull off something crazy. And now we're about… I'd say we're about 90 percent away from the album being finished. And it's really good; I'm really, really stoked on it. I actually like this one more than I like 'We Are Not Your Kind', and I loved'We Are Not Your Kind'."

As for when the new SLIPKNOT album might see the light of day, Corey said: "The goal right now — and I don't wanna talk out of turn — the goal is to get it ready for mix [in] January so we can get it out two or three months after. I have four songs that I have to sing, 'cause I'm redoing one that I wasn't happy with; I listened to it, and I was, like, 'I can do that better.' And honestly, very rarely have I ever had the opportunity to do that. So it's actually kind of rad that I'm getting a chance to go in and go, 'You know what? I can beat what I did.' But that's gonna take me five days to get that done. 'Cause I'm gonna do those four songs and then go back through and do punch-up on anything that I'm just not feeling. But it's gonna be very, very little 'cause I'm pretty down with everything that I've got. So once that's done, man, it's just a matter of having Joe mix it. And I know [percussionist] Clown's [Shawn Crahan] been working on the artwork. We're working on a video for… obviously for [recently released single] '[The] Chapeltown [Rag]', but also probably for whatever the first single's gonna be. Yeah, it's just a matter of time before we start getting it together."

Asked what the songwriting process in SLIPKNOT is like nowadays since the band's two main songwriters, bassist Paul Gray and drummer Joey Jordison, are no longer in the group, Corey said: "I think that's the greatest misconception. People think that Joey and Paul wrote all the music. It couldn't be further from the truth. Everybody writes. Joe and Paul were the ones that would get stuff going, but it would always change from their demo to the main meat of what the song would actually become. So, from that standpoint, we've still got writers like Jim [Root, guitar], we've still got writers like Mick [Thomson, guitar], we've still got writers like Clown; Clown has written a lot of stuff over the years. And the people have just never gotten a lot of the credit that they're due, I guess. I mean, I've written stuff for this band from time to time when I get the bug to write something super heavy. Then they take it and make it better — they always make it better. So from that standpoint, it's not really any different than the way it's been in the past. Obviously, the music sounds different because Paul's voice isn't there, Joey's voice isn't there. And yet we still are able to write in a way that sounds very SLIPKNOT, and that's because it would always go through the SLIPKNOT filter. No matter what demo we wrote, it would always go through the SLIPKNOT filter and become a SLIPKNOT song."

SLIPKNOT performed "The Chapeltown Rag" live for the first time on November 5 at Knotfest Los Angeles. The studio version of "The Chapeltown Rag", which was released that same day, was produced bythe aforementioned Barresi, who has previously worked with AVENGED SEVENFOLD, QUEENS OF THE STONE AGE and CHEVELLE, among many others.

Taylor described the song to Knotfest.com as "a punisher," saying it documents what happens when the distortions of mass media circulate within the echo chambers of social media.

Joey's family confirmed that he died "peacefully in his sleep" on July 26 of an unspecified cause.

Gray was found dead on May 24, 2010 after overdosing on drugs in a hotel room in a suburb of Des Moines, Iowa, where he and SLIPKNOT were based. His family blamed the death on a Des Moines pain doctor, Daniel Baldi, who had treated Gray for years, and sued the doctor and his former employers.