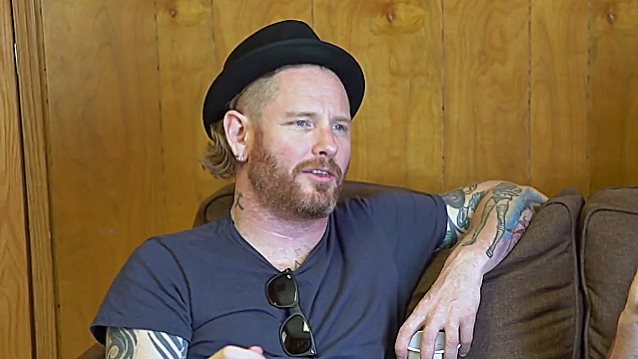 COREY TAYLOR: STONE SOUR's 'Hydrograd' 'Is Probably One Of The Things I'm Most Proud Of In My Life'

SLIPKNOT and STONE SOUR singer Corey Taylor was interviewed by Rock 100.5 The KATT's Jay Ramone at this year's edition of the Rocklahoma festival, which was held May 26-28 at "Catch the Fever" Festival Grounds in Pryor, Oklahoma, just outside Tulsa. You can now watch the chat below.

Speaking about the recording process for STONE SOUR's upcoming album, "Hydrograd", Taylor said: "Dude, it was the most fun I've ever had making an album. It was the easiest album I've ever made, and yet it is so strong, it's so badass. It is tight, it's fast, it's rocking, it's crushing, it's melodic, there's songs for the ladies. I mean, it's got everything you could ever want in a rock and roll album, man. And it's probably one of the things I'm most proud of in my life."

"Hydrograd" will be released on June 30 via Roadrunner Records. The disc was recorded at Sphere Studios in North Hollywood, California with producer Jay Ruston, who has previously worked with ANTHRAX and STEEL PANTHER.

STONE SOUR has had eight Top 10 songs on Billboard's Mainstream Rock Songs, dating back to "Bother" in 2002. The band has landed three top 10 albums on the Billboard 200 and has sold 2.1 million albums in the United States to date, according to Nielsen Music.