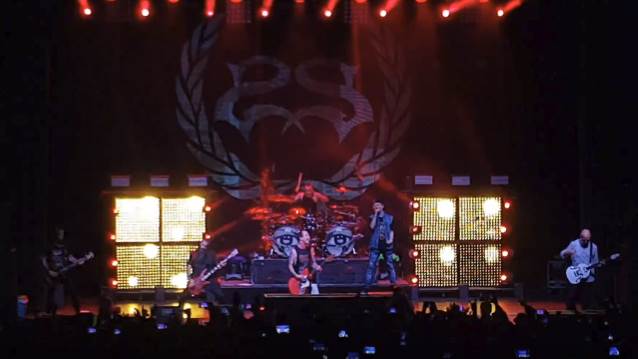 Griffin Taylor, the 15-year-old son of STONE SOUR frontman Corey Taylor, joined the band on stage Wednesday night (July 11) at Coliseu dos Recreios in Lisbon, Portugal to sing their hit single "Song #3". Fan-filmed video footage of his appearance can be seen below.

Prior to launching into the song, Corey told the crowd: "I've got something very special for you right now… We've only ever done this one other time, and it was one of the best fucking nights of my life. So I wanna invite to the stage my son, Griffin Taylor. Griffin's gonna help us out on this next song. And we're gonna do our very best, aren't we?"

Corey told the Wisconsin radio station 102.9 The Hog about sharing the stage with his son in New Jersey: "A million things go through your head. First of all, he's a natural. He'd never done anything like that before. We didn't even practice on stage with him. He and I went through it acoustically backstage. He was 14 at the time. At 14, not only could he lean back on the adrenaline and fall in the pocket, but note-wise, he was so dialed in on it. And then had the presence of mind to be running around stage, going for it, and then at the end, he jumps up on my check-me-out box and takes a selfie with the audience. I would have never in a million years thought to do that. I'd never felt that kind of pride in my life, man. I was, like, 'Oh, you've got the Taylor curse now, dude. You're screwed.' [Laughs]"

Taylor went on to say that if his son did decide to eventually become a musician, he would support him wholeheartedly.

Corey confirmed in December that he had been separated from Stephanie for almost a year and that he recently started a new relationship with Alicia Dove, a professional dancer and a member of the all-girl dance group CHERRY BOMBS.