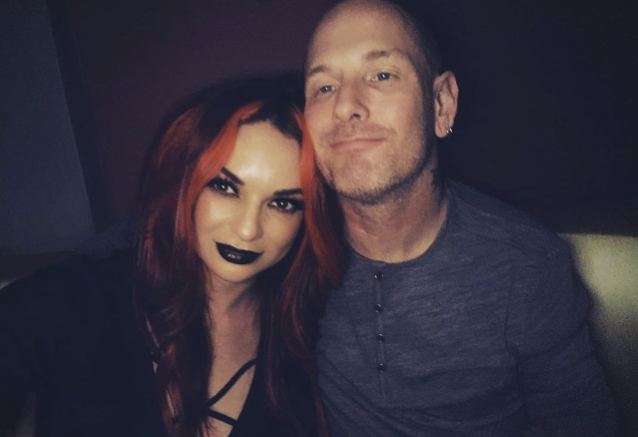 In a new interview with Alamo True Metal, Alicia Taylor, a professional dancer and a member of the all-girl dance group CHERRY BOMBS, was asked what drew her initially to her husband of the past two and a half years, SLIPKNOT and STONE SOUR frontman Corey Taylor.

"The first thing that I fell in love with of Corey was his mind," she said (as transcribed by BLABBERMOUTH.NET). "He's so well read. He could talk about anything, and his interests are all over the place. And I love that about him. I love his intelligence. I love his ability to write and speak so well; he's extremely articulate. I love that he's a little geeky and a little nerdy. And he loves movies, and he loves music, and he loves sports, and he loves so many things. And he's so well rounded in that aspect. So he and I would just talk about anything and everything and just find something — even if it was something that maybe I wasn't into and he was really into, or he wasn't really into but I was into, we could still talk about it and find something cool about it within one another.

"We are best friends," Alicia continued. "And I know everybody says that — it's so cliché: 'I married my best friend.' But it's true. We love hanging out, man. And we love exploring and doing things and traveling. And every day is an adventure together.

"I think it was his mind — absolutely — that I fell in love with first that drew me to him," Alicia repeated.

"We had been acquaintances for many years before we started dating. And our industry is so small. In our industry, everyone knows everybody or everyone knows someone through someone. The degree of separation is this big [holds two fingers close together]. So, we had always ran into each other a bunch of times but we never really got to know each other until we started planning that STONE SOUR [2017] tour [with CHERRY BOMBS as a support act]. And when you tour together, you're around each other a lot; I mean, there's nowhere to go. And we just connected so quickly and easily. And I mean, man, we'll be together five years now coming up this year, and it's still the same; nothing has changed. It's just us two dicks having fun. And we do. And it's so easy when it's with the right person. And nothing's hard; it just is the way it is and it's life and you enjoy every day of it. Not to get too sappy on you or anything, but it really is the coolest thing I've ever felt in my life — his love."

Corey and Alicia got married in October 2019 in their hometown of Las Vegas, Nevada. The reception was reportedly held in their home and was attended by a number of their friends and fellow musicians, including Roy Mayorga of STONE SOUR, Kyle Sanders of HELLYEAH, and Lajon Witherspoon of SEVENDUST.

Corey and Alicia began dating after the breakup of the singer's eight-year marriage with Stephanie Luby, whom he wedded in November 2009 (the couple had a daughter named Ryan). Corey was previously married from 2004 to 2007 to a woman named Scarlett, with whom he shares a son. The rocker also has a daughter from an earlier relationship.

CHERRY BOMBS will kick off a four-date "Macabarét" tour on February 25 in Albuquerque, New Mexico.