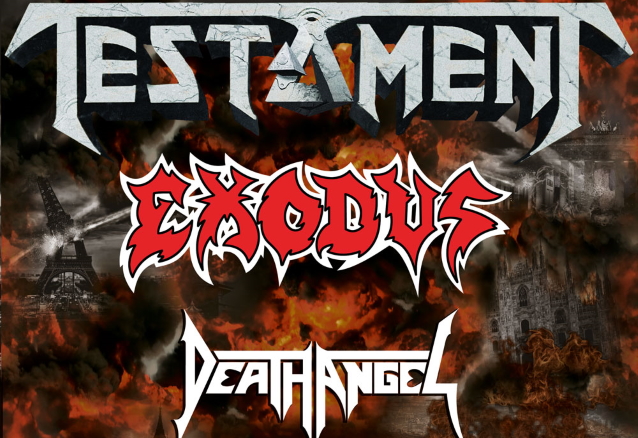 The February 25 concert in Milan, Italy featuring TESTAMENT, EXODUS and DEATH ANGEL has been canceled due to a fast-spreading outbreak of the new coronavirus.

The three bands, who are currently on the road in Europe as part of "The Bay Strikes Back 2020" tour, will perform in Zurich, Switzerland on Monday (February 24) and Barcelona, Spain on Thursday, February 27.

Several cities and towns across northern Italy were in lockdown Monday as authorities battled to contain the virus.

More than 200 cases of the virus have been confirmed in Italy, where the death toll rose to five. People have been banned from leaving infected areas, and police have been ordered to fine anyone caught entering or leaving certain towns.

The bulk of the cases are in the northern region of Lombardy, whose capital is Milan.

Officials have not yet tracked down the first carrier of the virus in the country. "We still cannot identify patient zero, so it's difficult to forecast possible new cases," Angelo Borrelli, head of the country's Civil Protection agency, said at a press conference.

There are now 79,339 cases of the virus, named COVID-19, in 30 countries and 2,619 deaths, according to the latest figures from the World Health Organization.

We’re sorry to announce that the show in Milano, Italy has been CANCELED, due to an outbreak of the coronavirus. But the show must go on! Tonight we’re in Zurich, Switzerland! See you in the pit!