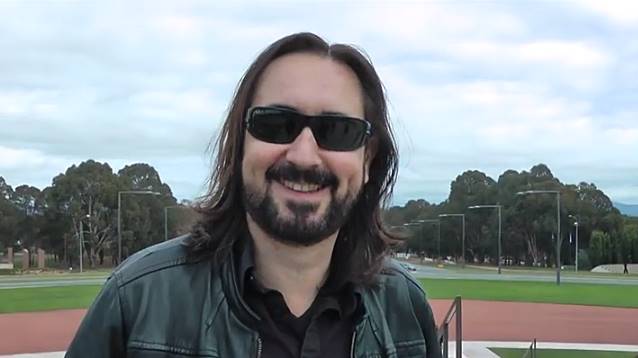 A collection of video highlights from the recent Australian tour from reunited Swiss technical thrash metal masters CORONER can be seen below.

CORONER will soon begin working on material for a potential follow-up to the band's acclaimed last studio release, 1993's "Grin".

During an interview with AndrewHaug.com, Australia's first-ever dedicated 24/7 rock and metal online radio station launched by Andrew Haug, the former host of Triple J Australia's "The Racket" radio show (originally "Full Metal Racket"; 2001-2011), CORONER guitarist Tommy Vetterli was asked if the band has any interest in putting out new music four years after the group announced its return to the metal scene. "Sure," he replied. "That's actually one of the reasons why [original CORONER drummer] Marky [Edelmann] wanted to leave the band."

CORONER last month announced the addition of drummer Diego Rapacchietti to the group's ranks. The band said in a statement: "Diego is an accomplished and innovative drummer. He has played in bands PAGANINI, VENTURIA, 69 CHAMBERS, and many more. Diego also has extensive experience as a studio drummer for various projects."

Rapacchietti made his live debut with CORONER on May 29 at Salzhaus in Winterthur, Switzerland. He then joined his new bandmates on their first Australian tour ever, which kicked off on June 5 in Melbourne.

Edelmann (a.k.a. Marquis Marky) left CORONER in February, explaining in a statement that "it was clear from the start that I didn't want to record another album. I love the sound of CORONER, but for me, it's the moment to explore new sounds without the weight of the past on my shoulders."