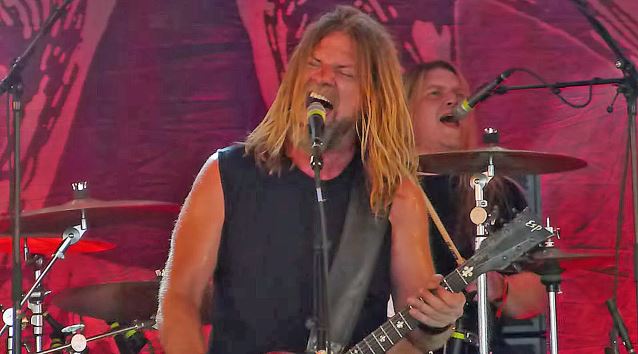 Fan-filmed video footage of CORROSION OF CONFORMITY's July 4 performance at the Roskilde Festival in Roskilde, Denmark can be seen below.

Speaking about the fact that CORROSION OF CONFORMITY's current European tour marks the first time he has performed full shows with the band for the first time since 2006, guitarist/vocalist Pepper Keenan told FreqsTV: "It's a weird thing to be in that world; it's like going in a time warp. It's like we didn't miss a beat, but it's been almost a decade."

He continued: "You don't have time to waste energy on negative things or whatnot. And there's not really many negative things at all. We just all kind of went separate ways. But the thing that got [the reunion] going was the fans and people wanting us to play these damn songs. So I give kudos to the fans for making us get off our asses and do this."

Added CORROSION OF CONFORMITY guitarist Woody Weatherman: "To me, it feels awesome to be able to play these songs again that we haven't been playing. It's a challenge to jump back in and make it as real as it was, and maintain that vibe."

Continued Pepper: "But the songs have stood the test of time. And playing 'em, it's just such a pleasure to go… We had to learn, like, 22 songs.

"I'm sure all of us would agree we're not really the kind of guys to go backwards, but it's been fun to do, and it's kind of enlightenened me in a bunch of different ways of guitar playing, singing and whatnot. But it still just boils down to plugging in and playing — keeping your head in the right spot where you're not losing focus, and dropping the hammer as good as you can."

Keenan added: "To be honest with you, I can't complain. I wasn't sure quite what to expect, but people are showing up, it's fucking packed, and I think it's a good catalyst for us to go from here, if we want to, to see if we can still do it. It's not a novelty act, we're not going totally backwards, but the songs still stand this day as good as they did then, if not better. I think we're actually playing 'em better than we did back then. I mean, they've only had twenty years to figure the words out, so they're singing louder than they did back in the day."

CORROSION OF CONFORMITY's first European trek with Keenan back in the fold since 2006 marks the first time the "Deliverance" lineup of the band has played together since 2001.

CORROSION OF CONFORMITY's most recent studio album with Keenan, "In The Arms Of God", came out in 2005 on Sanctuary Records.