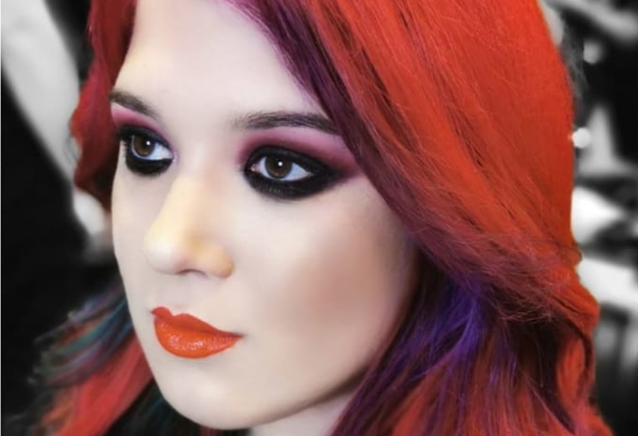 CRADLE OF FILTH has announced the addition of keyboardist Anabelle Iratni to the band's ranks.

Iratni, who previously played alongside CRADLE OF FILTH frontman Dani Filth in DEVILMENT, as well as her own group VEILE, made her live debut with CRADLE OF FILTH on Wednesday (May 12) during the band's livestreamed concert.

CRADLE OF FILTH has set "Existence Is Futile" as the title of its 13th studio album, due later this year via Nuclear Blast Records. The LP was once again recorded at Grindstone Studios with producer Scott Atkins and features artwork from Arthur Berzinsh, who previously worked with CRADLE on 2015's "Hammer Of The Witches" and 2017's "Cryptoriana - The Seductiveness Of Decay".

This past December, Dani said that isolation and lack of live touring amid the coronavirus pandemic has contributed to making CRADLE OF FILTH's upcoming LP "our best album of current years, if not all time." He wrote on CRADLE's Facebook page: "There was absolutely no pressure to turn the album in. In fact, there really was nothing better to do than indulge our creative juices and thus a huge swathe of the year was spent in the sultry depths of the Suffolk countryside polishing and perfecting our latest musical excretion.

"It's an absolute killer of an album (if you forgive my self-flattery),with an immense production courtesy of Scott Atkins and Grindstone studios once again, and I'd like to be able to describe it to you but there is so much bubbling intently in this album," he continued. "Fast and slow parts (and faster still),new delectable flavours and those reminiscent of earlier COF albums galore, massive choruses and melancholic drop-downs, old skool melodic NWOBM amid furious, scathing black metal amid apocalyptic groove and we as a band can't wait for everyone to hear it…. And more importantly, experience our birthed monster live."

Last October, Dani told Metal Injection that CRADLE OF FILTH's follow-up to "Cryptoriana - The Seductiveness of Decay" was turning out to be "fantastic" and "probably the best album we've written. We've had the opportunity to really dig deep into it and work hard on the tracks, and, if necessary, rewrite parts, which we have done," he said. "I certainly have rewritten parts and have no qualms about Scott saying this just isn't good enough compared to all the other songs on the record. But I would say it's not very different from 'Cryptoriana'. It's not as intricately laced. That album spoke of the times it was trying to assimilate and represent. This album is about existential terror. The threat of everything. The end of the world, the end of one's life, existential dread. A little hope, I guess in there. It's a CRADLE OF FILTH record. The songs are strong. They're extreme, but it's a mixture of everything."

Regarding what is has been like working with Atkins again, Dani said: "It's very comfortable recording with him. You know, he's very free and easy with how he talks to me. There's no pandering; we're good friends and we can talk to each other how we want. His studio is not far from where I live. It's in the countryside, so during lockdown, I was able to travel to and from the studio. We had less hours to work. We had nothing more that we could do. There was no pubs that we could saddle off to over lunch time — it was just work, work, work. And it was nice, relaxed and, fortunately, lockdown in England's been okay, because we've had some fantastic weather this year."

After a triumphant debut at our live stream yesterday, please all welcome Anabelle to Cradle Of Filth!...