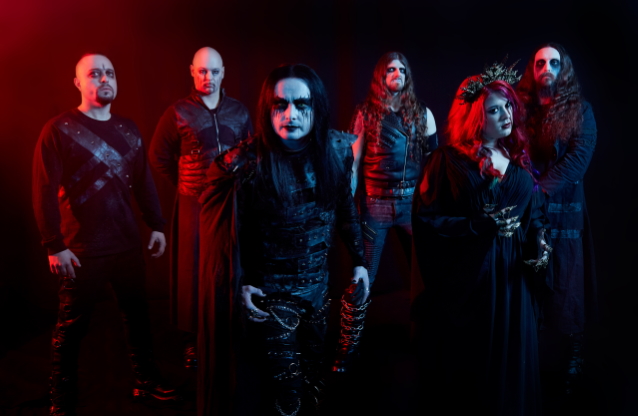 CRADLE OF FILTH Parts Ways With Guitarist And Keyboardist

British extreme metallers CRADLE OF FILTH have parted ways with guitarist Richard Shaw and keyboardist Anabelle Iratni. Richard will be replaced for the band's upcoming tour by Donny Burbage, while Zoe Marie Federoff will step in for Anabelle.

CRADLE OF FILTH frontman Dani Filth commented: "It is with the gravest of sadness that CRADLE OF FILTH announce the departure of guitarist Richard Shaw and keyboardist Anabelle Iratni from the band's ranks.

"Due to other commitments Richard is passing his prestigious baton to newcomer Donny Burbage, who will be fulfilling guitar duties throughout the forthcoming US tour with DANZIG, alongside Ashok and bassist Daniel Firth.

"We also say farewell to Anabelle and thank her for her awesome contribution on 'Existence Is Futile', her successor being the very talented singer/keyboardist Zoe Marie Federoff.

"As with Rich, the band wish Anabelle continued success in all her future endeavours."

Regarding what led to Shaw and Iratni's departures, Filth said: "Unfortunately it just is what it is. If someone feels that their tenure with the band has ended, then who am I to argue with that? We have to respect that people have personal commitments and/or sometimes find the career choice of being in a band like CRADLE a tad overwhelming. That being said, the band are continuing as indefatigably as ever, with a slew of summer festival dates happening after the tour with DANZIG in the US and Canada, plus further Autumn announcements to follow swiftly after. We also have another exciting announcement to share, but all in due course! Regardless of what befalls us, we stay FILTHY!"

CRADLE OF FILTH's latest album, "Existence Is Futile", was released in October. The LP was pieced together in isolation at Grindstone Studios in Suffolk with studio guru Scott Atkins (DEVILMENT, BENEDICTION, VADER). Horror icon Doug "Pinhead" Bradley made a welcome return to the CRADLE fold, lending his dulcet tones to the band's most politically astute song to date, the epic "Suffer Our Dominion" as well as the album bonus track "Sisters Of The Mist", which is the conclusion to the "Her Ghost In The Fog" trilogy that started over 20 years ago on the infamous and classic "Midian".

A year ago, CRADLE OF FILTH announced the addition of Iratni to the band's ranks.

It is with the gravest of sadness that 𝗖𝗥𝗔𝗗𝗟𝗘 𝗢𝗙 𝗙𝗜𝗟𝗧𝗛 announce the departure of guitarist Richard Shaw and Keyboardist...