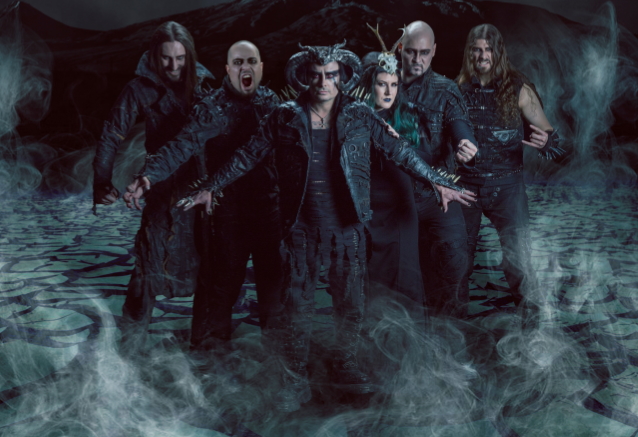 Says the band: "Due to the ongoing Covid crisis and the uncertainty of travel, we unfortunately need to move the date of our live stream event. With band members residing outside of and throughout the UK, there was a real chance of quarantine or travel issues. The new show date is February 20, 2021. All tickets remain valid and everyone who bought one is automatically entered in to win a custom CRADLE OF FILTH Midian guitar worth over $2,000. Sorry for any inconvenience, the show will be an epic event not to be missed!”

Next year's live stream will take place at an as-yet-undisclosed bigger venue, with "twice the production."

CRADLE OF FILTH recently finished recording the follow-up to 2017's "Cryptoriana - The Seductiveness of Decay" album for a 2021 release. Vocalist Dani Filth told Knotfest.com about the effort: "We were very fortunate that Martin ['Marthus' Škaroupka] came in to do drums just before lockdown, and since then, everyone's just been chipping in in bits. I've had the longest, as I live close to the studio, but it means we've been able to revisit songs, amend things, try loads of different ideas. We've probably gone over-budget, but we don't really care about that as it's going to be the best-sounding record we've ever done, and probably the best-written record."

He continued: "It's been quite relaxing oddly being able to take our time with it without that pressure of deadlines, but it does mean with everyone doing things in parts as we were able, we've not all been together since the last show, and haven't been with our new keyboard player as well who contributed to the album but hasn't yet played a show."

On the topic of the musical direction of the new CRADLE OF FILTH material, Dani said: "It's going somewhere entirely different from the previous records. It's not going into space yet, but it's different. I hate describing our albums because I get tongue-tied about them. There is a bit of experimentation in there. It's heavier, faster, slower in parts. It's definitely going to have a unique sound to it where we purposefully took that on board, aiming for a more natural live sound that's more spacious. Like I said, we had that extra time to work on the record given to us this year… before all the leeway was taken back again."

This past February, CRADLE OF FILTH announced the departure of its keyboardist of the past seven years, Lindsay Schoolcraft. A replacement keyboardist has not yet been announced.

Due to the ongoing covid crisis and the uncertainty of travel, we unfortunately need to move the date...