CRADLE OF FILTH Pulls Out Of Germany's TOMAHAWK Festival

British extreme metallers CRADLE OF FILTH have cancelled their appearance at the Tomahawk Festival, set to take place this Saturday, March 28 in Hamm (near Dortmund),Germany. The band says in a statement, "Due to circumstances beyond our control, we have been prevented from performing at the Tomahawk Festival this weekend. Anyone who has already bought tickets and is unhappy about this should contact the promoter of the event. We are very sad if we have disappointed anyone as would never have wished to do that. Please accept our sincere apologies and we shall see you on our European tour."

CRADLE OF FILTH's new album, "Godspeed On The Devil's Thunder", entered the German Media Control chart at position No. 37. The CD sold a little over 11,000 copies in the United States in its first week of release to debut at position No. 48 on The Billboard 200 chart.

"Godspeed On The Devil's Thunder" is the follow-up to "Thornography", which shifted nearly 13,000 copies in the U.S. the first week out to enter The Billboard chart at No. 66. This was roughly in line with the performance of its predecessor, "Nymphetamine", which premiered with almost 14,000 copies back in October 2004.

"Godspeed on the Devil's Thunder" is conceptual and is based on the well-documented, true-life fall from grace of a shadowy historical figure named Gilles de Rais, a wealthy French nobleman who was one of Joan of Arc's brothers-in-arms. He was best known, however, as a prolific serial killer who mixed prayers with his nightly murders as well as an aspiring alchemist. He was accused of a panoply of crimes, among them heresy, demonology and kidnapping. There's even an extreme fringe sect of historians who question de Rais' true status, with some convinced he was framed. 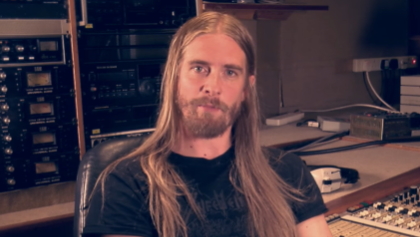