England's black metal maestros CRADLE OF FILTH will make their much-anticipated return to U.S. soil this winter for their first headline tour since the Viva La Bands tour in fall 2007. The band will be spreading their black metal seed, supporting "Godspeed on the Devil's Thunder", their latest opus for Roadrunner Records. SATYRICON will serve as main support, while Greek metallers SEPTICFLESH (no written as one word) will open the show. The tour runs for six weeks.

Behind-the-scenes footage from the filming of CRADLE OF FILTH video for the track "Honey And Sulphur" can be viewed below.

If you live in the U.S. and you pre-order"Godspeed On The Devil's Thunder", you will get the track "Midnight Shadows Crawl To Darken Counsel With Life" immediately with your purchase. You will receive an e-mail from FYE which will provide you with an exclusive code to download the track from the CD.

"Godspeed On The Devil's Thunder" will be released on October 28 via Roadrunner Records.

30-second audio samples of all the tracks that appear on < "Godspeed On The Devil's Thunder" are available on Amazon.de.

In addition to the standard version of "Godspeed On The Devil's Thunder" (due out on October 28 via Roadrunner Records),there will also be a special edition and vinyl released.

"Godspeed on the Devil's Thunder" (see artwork below) is conceptual and is based on the well-documented, true-life fall from grace of a shadowy historical figure named Gilles de Rais, a wealthy French nobleman who was one of Joan of Arc's brothers-in-arms. He was best known, however, as a prolific serial killer who mixed prayers with his nightly murders as well as an aspiring alchemist. He was accused of a panoply of crimes, among them heresy, demonology and kidnapping. There's even an extreme fringe sect of historians who question de Rais' true status, with some convinced he was framed.

Regardless of viewpoint, leave it to CRADLE OF FILTH to dissect de Rais' biography, exploring subversive, inflammatory historical subject matter in its lyrics, taking an unjaundiced look at a controversial figure in European history, set to epic black metal music. The band profiled Hungarian countess Elizabeth Bathory, who attempted to preserve her youth by bathing in the blood of virgins, in the past and now moves forward by framing their latest album around the story of de Rais.

CRADLE OF FILTH's vocalist Dani Filth elaborated on the album's concept, saying, "By far this is our most extreme, dramatic and deeply disturbing album to date. The legend of Gilles de Rais has been given fresh, vampyrical life in this conceptual meisterwerk, swathed in pitch-black magic and a viciousness unsurpassed in the annals of CRADLE history. Screw what our detractors say, everyone who has heard this album has bruised their jaws on the pentagram-bejewelled floor." 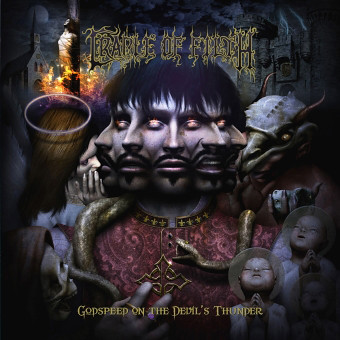