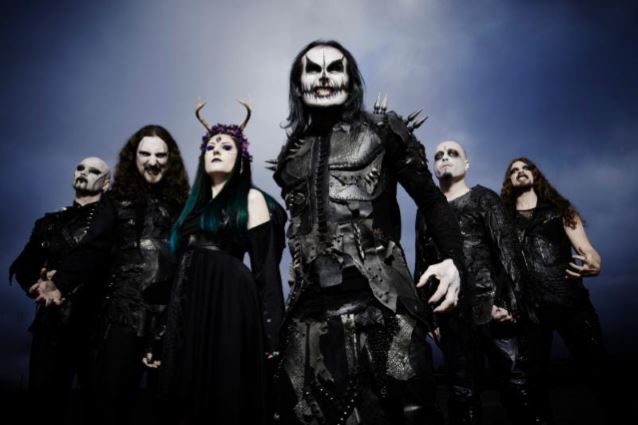 CRADLE OF FILTH To Begin Recording New Album In December

British extreme metallers CRADLE OF FILTH will enter the studio in December to begin recording their follow-up to 2015's "Hammer Of The Witches" album for a tentative September 2017 release.

Filth described CRADLE OF FILTH's new material as "very Victorian, gothic horror" with songs that "are seven, eight minutes" in length and that are "a bit proggy [and] fast."

The writing sessions for CRADLE OF FILTH's next album were held in Brno, Czech Republic, which was chosen as a location for several reasons aside from the draw of its elegance and rich architecture; drummer Marthus and second guitarist Ashok live there, plus Brno is also home to Europe's second largest Ossuary, which is essentially a medieval charnel house filled with fifty thousand skeletons, second only in size to the catacombs in Paris.

Among the tracks that are being considered for inclusion on the upcoming CRADLE OF FILTH CD is "Achingly Beautiful", which was originally composed during the sessions for "Hammer Of The Witches" but didn't make the final cut. Dani previously described the song as "very old-school CRADLE OF FILTH, featuring a haunting middle section full of soaring female vocals and choir very akin to 'A Gothic Romance' from the album 'Dusk... And Her Embrace'."

"Hammer Of The Witches" marked the first release with CRADLE OF FILTH's new lineup, which includes new guitarists Ashok (of Czech groups ROOT and INNER FEAR) and Richard Shaw (of English acts EMPEROR CHUNG and NG26).